What is Apache Flink?

Apache Flink is a distributed processing system for stateful computations over bounded and unbounded data streams.  It is an open source framework developed by the Apache Software Foundation (ASF).

Flink is a German word which means Swift or Agile, and it is a platform which is used in big data applications, mainly involving analysis of data stored in Hadoop clusters. Flink is designed to run in all common cluster environments, performs computations at in-memory speed and at any scale. Apache Flink is written in Java and Scala.

Apache Flink streaming applications are programmed via DataStream API using either Java or Scala. Python is also used to program against a complementary Dataset API for processing static data.

Flink is a true streaming engine, as it does not cut the streams into micro batches like Spark, but it processes the data as soon as it receives the data.

Apache Flink is designed as an alternative to MapReduce. It is the batch-only processing engine which is paired with HDFS (Hadoop Distributed File System) in Hadoop’s initial incarnation. The latest version of Flink is v1.8.0, which is released on April 9, 2019.

Any type of data is produced as a stream of events, such as Sensor measurement, Credit card transactions, user interactions on the website or mobile application, or machine logs. All of these data are generated as a stream.

Data can be processed into two forms, which are:

Unbounded streams have a start but no definite end. Unbounded streams do not terminate and provide the data as it is generated. It must be continuously processed, i.e., events must be immediately handled after they have been taken. Input is unbounded and will not be complete at any point of time, so it is not possible to wait for all input data to arrive.

Bounded data have defined start and end. It can be processed by ingesting all the data before performing any computation. To process bounded stream ordered ingestion is not required because bounded data set is always be sorted. Processing of bounded streams is also called as batch processing. 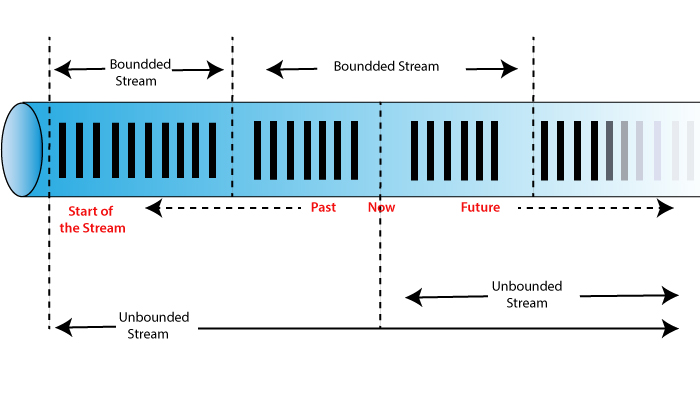 In 2010, a research project “Stratosphere: Information Management on cloud” was started as a collaboration of Technical University Berlin, Hasso-Plattner-Institute Potsdam, and Humboldt-Universitat zu Berlin. Flink started from a branch of stratosphere’s distributed execution engine, and in March 2014, it became an Apache Incubator project. Flink accepted as an Apache top-level project in December 2014.

Below diagram shows a complete ecosystem of Apache Flink. Flink Ecosystem has different layers, which are given below: 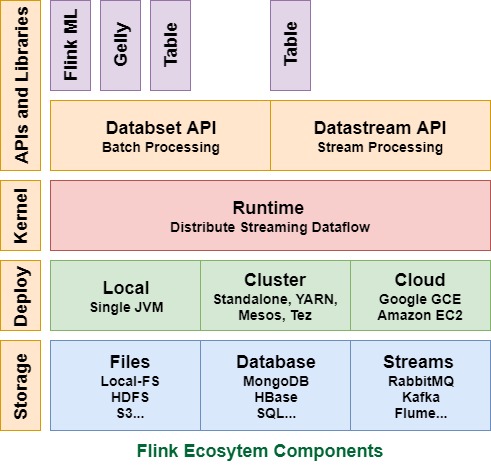 The second Layer of Apache Flink is Deployment/ Resource Management. We can deploy Flink in these following modes:

a) Standalone mode is a default resource manager which shipped with Flink.

b) YARN is a demanding resource manager. It’s a part of Hadoop which introduced in Hadoop 2.x.

Runtime is a core layer of Apache Flink. It is also known as kernel of Flink. Runtime is a streaming engine, which provides fault tolerance, distributed processing, reliability, native iterative processing capability, etc.

We have several APIs and libraries available at the top layer of the architecture. It provides a different capability to Flink. Dataset API is used for the batch processing, and DataStream API is used for stream processing.

This layer has some specialized components, such as Flink ML for Machine Learning, Gelly for graph processing, and Table for SQL processing.

Following description is given for components and APIs of the fourth layer:

DataSet API allows the user to implement operations on the dataset like filter, map, group, join, etc. It is mainly used for distributed processing.

Dataset API is a special case of Stream processing in which, we have a finite data source.

It can be embedded with DataSet and DataStream APIs. It helps users from writing complex code to process the data. It allows the users to run SQL queries at the top of Flink.

Gelly is a graph processing engine. It allows users to run a set of operation to create, process, and transform the graph. Its APIs are written in Scala and Java.

Apache Flink works in Master-slave manner. The slave is a worker node of the cluster, and Master is the manager node. As we can see in the figure that the client can submit the work application to Master, which is the centerpiece of the cluster. Now, the Master node will divide the work and submit it to the slave nodes. Flink enjoys the distributing computing power that allows Apache Flink to process the data at fast speed. 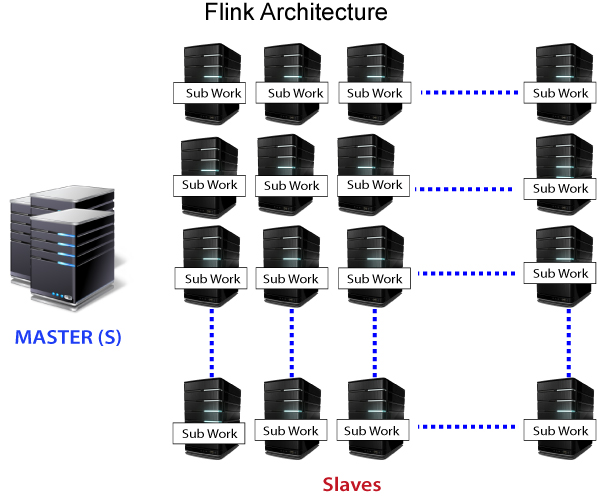 There are two types of node. 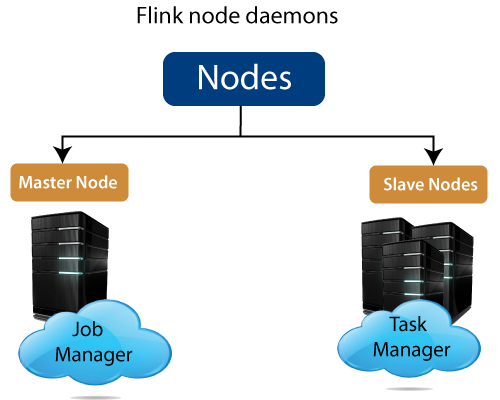 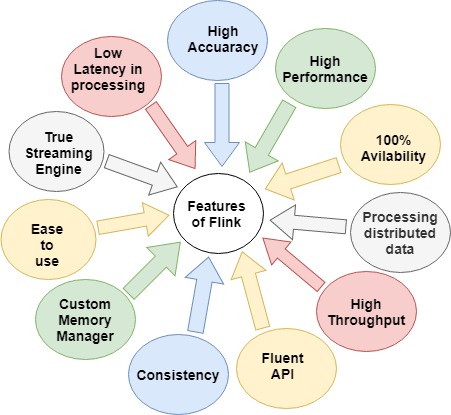 How is Flink different from Apache Hadoop and Apache Spark?

How to install Apache Flink

Flink can runs on Windows, Linux and Mac OS. We need to follow some steps on Linux, Mac OS as well as Windows environment:

Here, we will learn the installation process for Windows.

Step 1: Before download, we have to choose a binary of Flink based on our requirements. If our data stored in Hadoop, download binary according to Hadoop version. Download the file from here. https://flink.apache.org/downloads.html. 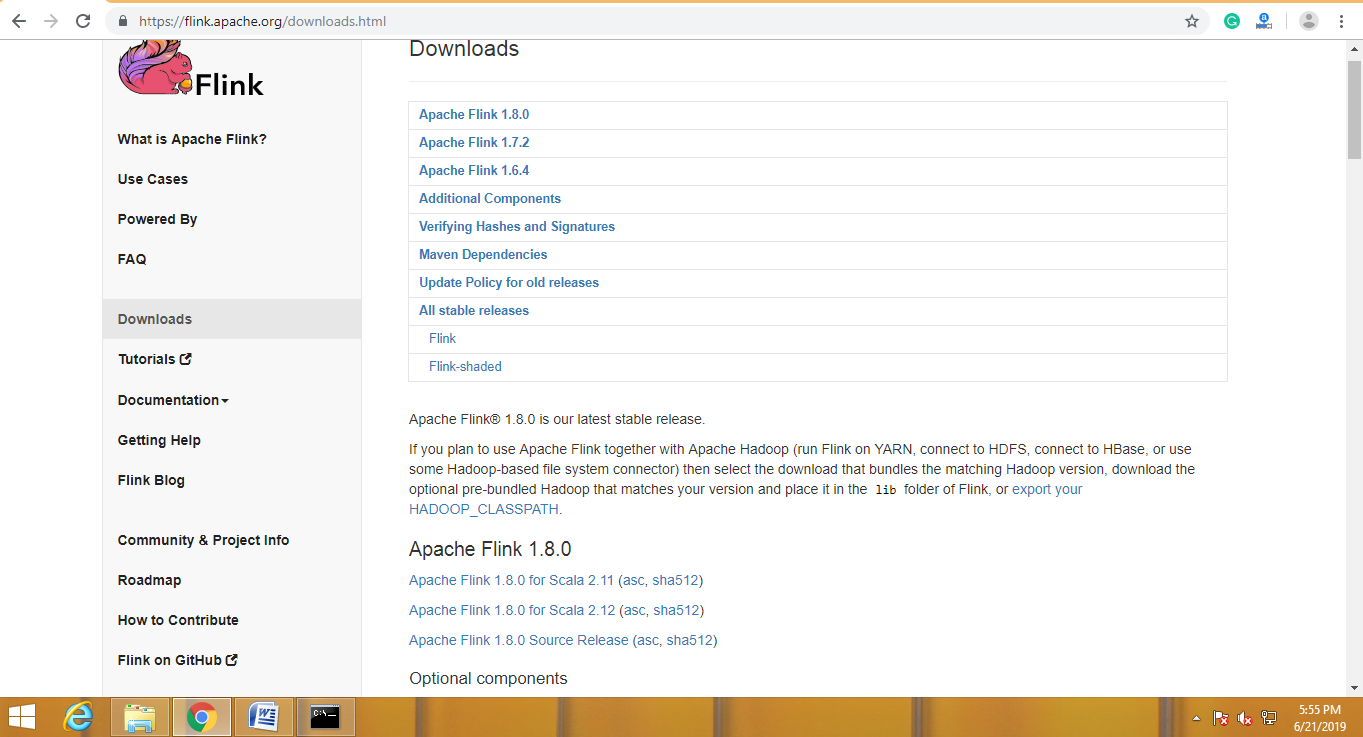 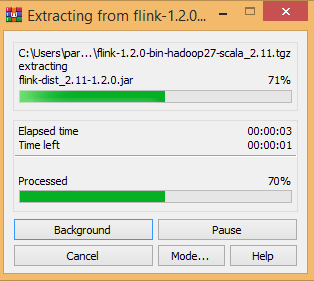 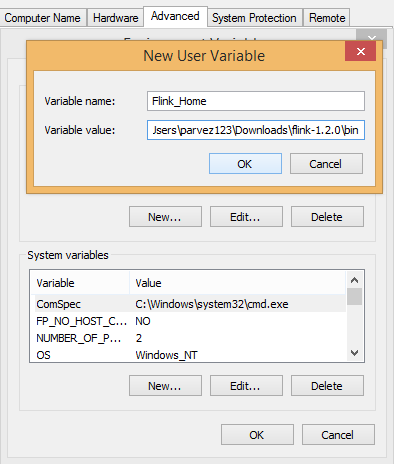 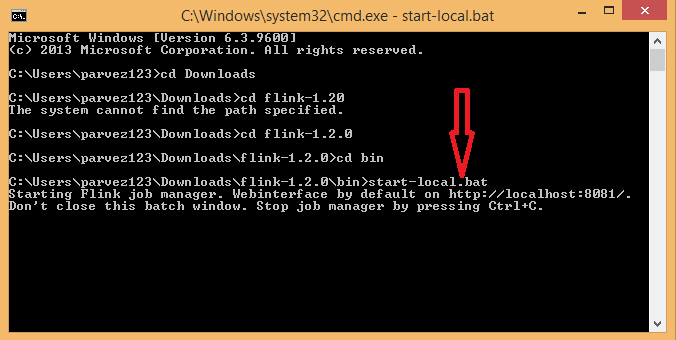 Step 5: We can stop the local cluster by using the command stop-cluster.bat or by pressing shortcut key Ctrl+C. 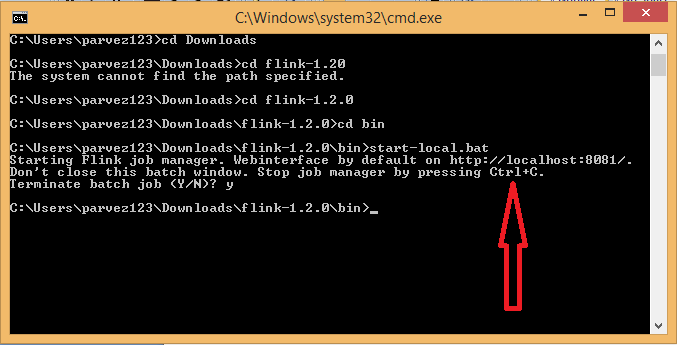