What is Apache Hama?

Apache Hama is a java based framework for Big Data analytics. It uses the Bulk Synchronous Parallel (BSP) computing techniques for massive scientific computations, e.g., matrix, graph, and network algorithms. It is a distributed computing framework inspired by Google’s Pregel large-scale graph computing framework described in 2010. Hama was established in 2012 as a Top-level Project of The Apache Software Foundation.

A GroomServer is a process which performs BSP tasks assigned by BSPMaster. Each groom contacts the BSPMaster, takes assigned tasks, and reports its status to the master (BSPMaster) via periodic piggybacks called heartbeat messages. Each groom is designed to run with HDFS (Hadoop Distributed File System) or other distributed storages. The assigned task is run in a child Virtual Machine, which is spawned every time a new assignment comes. A groom server and a data node, both of them should be run on one physical node to achieve the best performance for data-locality.

A zookeeper manages the efficient barrier synchronization of the BSPPeers. It is also used for the area of a fault tolerance system. 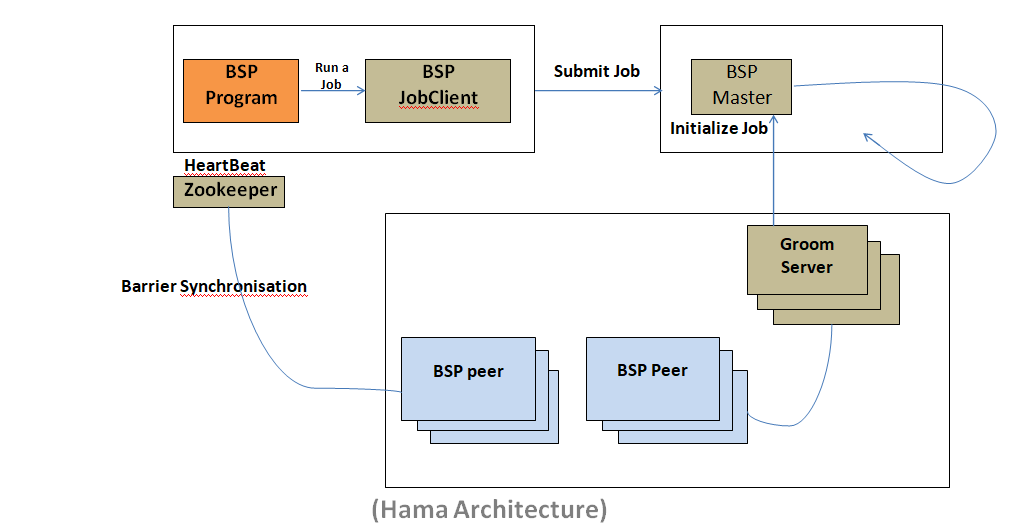 Process of Communication and Synchronization

Each BSP task consists of an Outgoing Message Manager and Incoming Queue.

Outgoing Message Manager collects the message required to be sent, serializes it, compresses it and puts it in bundles. At the barrier synchronization phase, each BSP task is used to exchange, de-serialize, decompress the bundle and put it into the incoming queue.

The task to efficiently process massive digital data is growing exponentially, which becomes increasingly challenging. Most of the big data projects are limited in their processing domain. However, Hama is a framework which supports diverse massive computational tasks and is more suitable for intensive iterative applications. It outperforms MapReduce frameworks in such application domains because it avoids the processing overhead of sorting, shuffling, reducing the vertices, etc. MapReduce inherits this overhead for each iteration and essentially there exist at least millions of iterations, whereas Hama provides a message passing interface, and each BSP superstep is faster than a full job execution in the MapReduce framework, such as Hadoop.

Hama was implemented on top of Hadoop because of:

Hama consists of similar architecture with Apache Hadoop and the inspiration from Google Pregel still it has signiﬁcant differences. It prefers to provide a more general purpose framework than Pregel and Apache Hadoop, which supports massive scientiﬁc computations such as matrix, graph, machine learning, business intelligence, and network algorithms. It is not limited to graph processing, but also provides a full set of primitives that allows the creation of generic BSP applications.

The main differences between Hama and Hadoop architecture are illustrated in the following image: 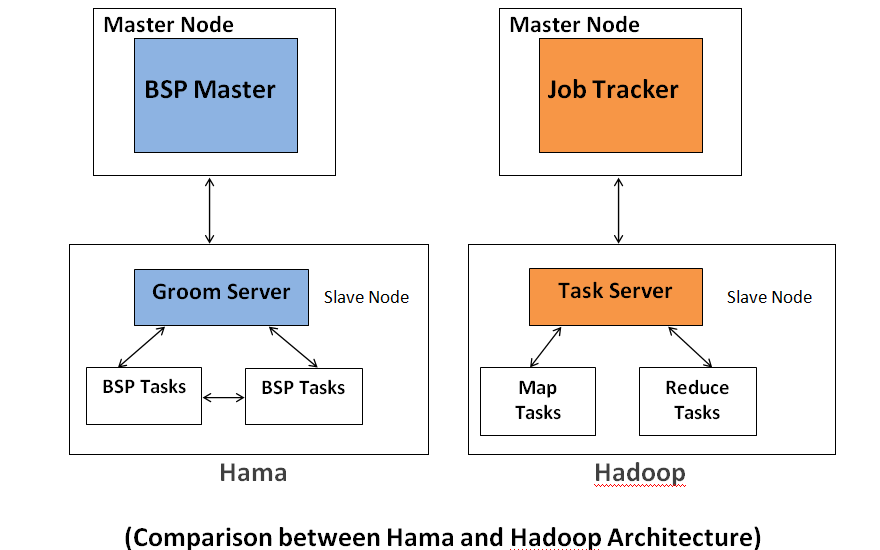 Each framework has respective advantages and disadvantages, and there is no single yardstick that truly embodies a one-size-fits-all solution.

Make sure that you have installed all the required software on all nodes in your cluster:

Untar the files to your destination of choice and use the command:

Don’t forget to choose the directory as the same user you configured Hadoop.

The $HAMA_HOME/bin directory contains some script which is used to start Hama daemons.

It starts all Hama daemons, the BSPMaster, GroomServers, and Zookeeper.

Make sure to start Hama with the same user configured for Hadoop.

$HAMA_HOME/conf directory consists of some configuration files for Hama which are:

It contains some environment variable settings which are required for Hama. It can be used to affect some aspects of Hama daemons behavior, such as where log files are stored, and the maximum amount of heap used, etc. The only variable required to be changed here is JAVA_HOME, which specifies the path to Java.

This file lists the hosts, one per line, where the GroomServer daemons will run. By default, it contains the single entry localhost.

It contains some generic default settings for Hama daemons. This file should not be modified.

It contains site-specific settings for all Hama daemons and BSP jobs. It remains empty by default. The settings in this file override those in hama-default.xml. This file should keep only those settings which must be respected by all the servers and clients in a Hama installation.

This section will help you to understand how to get started by setting up a Hama cluster.

If you are in Local Mode, skip this step. Otherwise, run the command:

It will start a BSPMaster, GroomServers, and Zookeeper on your machine.

To stop the Hama Cluster, run the command:

It will stop all the daemons running on your cluster.

For additional information, check out the Compatibility Table:

By default, Hama 0.7 contains hadoop-2.7.0.jar files. If you are going to use lower or higher version of Hadoop, then you need to replace Hadoop jar files in the ${HAMA_HOME}/lib folder.

To run with Hadoop 1.x, download ansrc-release tarball and build with the following command:

Hama provides examples packages that allow running examples on Hama cluster quickly. To run one of them, use command:

For example: download an Iris dataset from here: http://people.apache.org/~edwardyoon/kmeans.txt

And then, run K-Means using the command:

If there is a lot of parallel processing for a massive amount of data, then it is a good idea to produce bulk synchronous programming models and use Apache Hama framework for the computations.

Note: Apache Hama is an open source volunteer project under the Apache Software Foundation which encourage us to learn about the project and contribute our expertise. Moreover, it will help to stimulate interdisciplinary research and development in Hama to unleash its full potential.