Apache HAWQ can be described as an advanced Hadoop native SQL query engine. It includes the key technological advantages of MPP (Massively Parallel Processing) database with the scalability and convenience of Hadoop. It has tools to confidently and successfully interact with petabyte range data sets. It is a parallel SQL query engine built on top of the HDFS, claiming to be the world fastest SQL engine on Hadoop.

Apache HAWQ was brought into the Apache Foundation from the well-established Pivotal HAWQ project. Pivotal developed HAWQ as a SQL query database that combined the merits of Pivotal Greenplum with Hadoop distributed storage. Pivotal contributed the Pivotal HAWQ core to Apache Foundation in September 2015. The historical changes can be described as:

HAWQ reads data and writes data to HDFS (Hadoop Distributed File System) natively, which is fast. It delivers industry-leading performance and linear scalability. It provides users a complete, standards compliant SQL interface, which means HAWQ works with SQL-based applications and BI/data visualization tools. It can be used to execute complex queries and joins, including roll-ups and nested queries. The original team of developers continued working on HAWQ project to make the product better, so it can run adequately on public cloud, private cloud, or shared physical cluster environments. Because of continuous development, it also works with the rest of the Apache Hadoop ecosystem products. It can be integrated and managed with Apache YARN provision with Apache Ambari, and interface with Apache HCatalog. It also supports Apache Parquet, Apache HBase, and works well with the Apache MADlib machine learning libraries for AI-based analytics. HAWQ divides complex queries into small tasks and distributes them to MPP query processing units for execution.

For a typical deployment, each slave node consists of one physical HAWQ segment, an HDFS DataNode, and a NodeManager. Masters for HAWQ (HDFS and YARN), are kept on separate nodes. In HAWQ architecture, nodes can be added dynamically without data redistribution. Expansion takes only seconds. If there is a new node, it automatically contacts the HAWQ master, which performs to make the resources available on the node to be used for future queries immediately. A diagram shows the high-level architectural view of a typical HAWQ deployment: 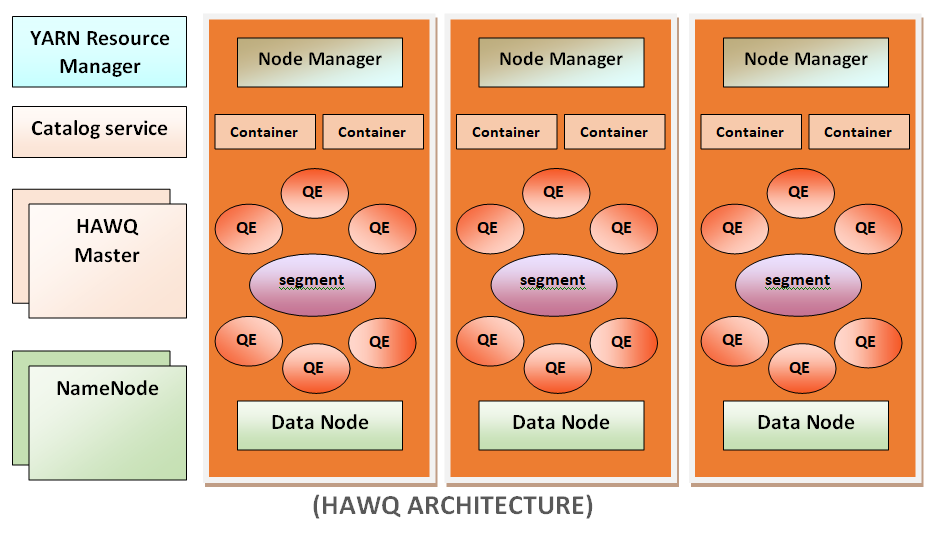 HAWQ is perfectly integrated with YARN for query resource management. It takes containers from YARN in a resource pool and manages those resources locally. It controls them by leveraging HAWQ’s own finer-grained resource management for users and groups. To get the query executed, HAWQ allocates a set of virtual segments according to the resource queue definitions, cost of a query, data locality, and the current resource usage in the system. After that, a query is dispatched to corresponding physical hosts, which can be a subset of nodes or the whole cluster. To avoid resource usage violations, HAWQ resource enforcer on each node monitors and controls the real-time resources used by the query.

A figure shows more details regarding the internal components of the newly redesigned HAWQ: 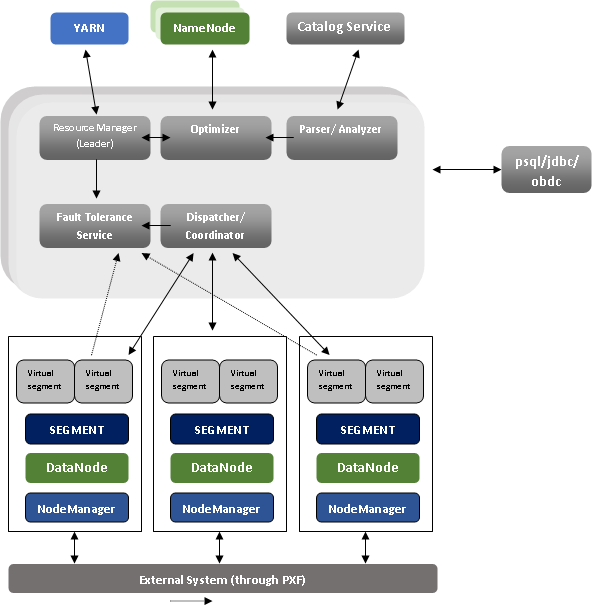 The HAWQ master is an entry point to the system. It is the database process which accepts client connections and processes the issued SQL commands. The HAWQ master parses, optimizes, dispatches the queries to the segments and coordinates the query execution. The HAWQ master is where the global system catalog exists. A global system catalog is the set of system tables which contain metadata about the HAWQ system itself. HAWQ master does not contain any user data; data exists only on Hadoop Distributed File System. End-users can interact with HAWQ through the master. It can also join the database using client programs such as psql or application programming interfaces (APIs) such as JDBC or ODBC. The segments are the units which are responsible for processing data simultaneously. Each host consists of only one physical segment. Each segment can generate many Query Executors (QEs) for each query slice, which makes a single segment act like multiple virtual segments. It enables HAWQ to utilize all available resources to perform in a better way. A segment is slightly different from a master because of: Interconnect can be described as the networking layer of HAWQ. Whenever a user connects to a database and issues a query, an interconnect starts creating the processes on each segment to handle the query. The interconnect indicates to the inter-process communication between the segments, as well as the network infrastructure on which this communication exists. The interconnect uses standard Ethernet switching fabric. The interconnect works with UDP (User Datagram Protocol) system to send messages over the network. The HAWQ checks for additional packet verification beyond what is provided by UDP. It indicates that the reliability is equivalent to the TCP (Transmission Control Protocol), and the performance and scalability exceeds that of TCP. Resource management is key to supporting elasticity. HAWQ supports three-level resource management: The HAWQ resource manager takes the resources from YARN and communicates with resource requests. After that, Resources are buffered by the HAWQ resource manager so that it can easily support low latency queries; it can also be run in standalone mode. HAWQ manages resources within resource queues. If a query is submitted, resources are obtained from HAWQ through libYARN, which is a C/C++ module in HAWQ that communicates with YARN. The resource allocation for each query is transferred with the plan together to the segments. Each Query Executor reads the resource quota for the current query and enforces the resource consumption during query execution. When query execution finishes (or is canceled) the resource is returned to HAWQ RM. A figure shows the detailed processing of the Resource Manager and its components: 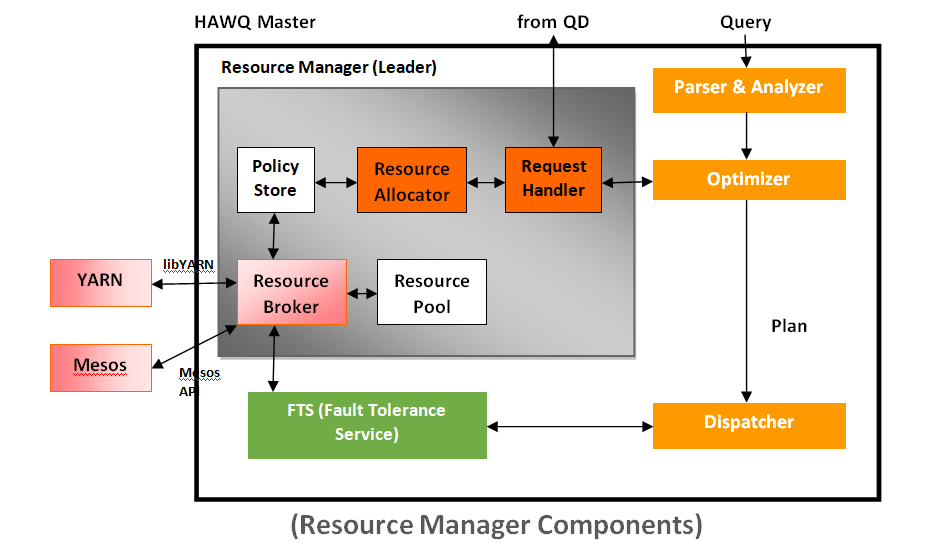 HAWQ has the following feature:

Most of the modern applications require to access the data directly in the HDFS. Many practitioners need SQL to interact with data in HDFS, as they are not well versed in MapReduce programming. Specifically, practitioners require advanced Hadoop Native SQL analytics with enterprise-grade processing capabilities. The following are the standard requirements from customers who are using Hadoop for their daily analytical work: In its starting state, Hadoop could not satisfy all of the given requirements. In the database community, one of the increasing trend is the wide adoption of MPP (Massive Parallel Processing) systems. HAWQ is true SQL compliant engine based on MPP history. It is a unique product with state of the art Query optimizer and dynamic partition elimination, robust HDFS data federation with the native Hadoop file system. With the YARN support and its acceptance as an Apache Foundation project, HAWQ is now more than ever a truly Hadoop Native SQL Database.

Follow the instructions below to install HAWQ software on a single host machine: If downloaded file is in tarball format , substitute the path to the extracted greenplum_path.sh file (for example /opt/hawq-<version>/greenplum_path.sh). Make sure that the gpadmin user has both read/write access to the parent directory specified with hawq_dfs_url. For example: Finally, Apache HAWQ is successfully started, and you can now validate the installation to ensure that the new cluster is functional. Also install PXF plug-ins if you are planning to access data in external systems such as HDFS or JSON files, Hive or HBase.

What did others say?

Apache HAWQ is currently in use at Alibaba, Haier, VMware, ZTESoft, and more than hundreds of users around the world. There are some feedbacks from satisfied users: “We admire HAWQ’s flexible framework and ability to scale up in a Cloud eco-system. HAWQ helps those who are seeking a heterogeneous computing system to handle ad-hoc queries and heavy batch workloads,” said by Kuien Liu, Computing Platform Architect at Alibaba. “Our Group has deployed clusters of more than 30 nodes in the production environment from the beginning of HAWQ,” said by Xiaoliang Wu, Big Data Architect at Haier. It shows that Apache HAWQ is accepted widely around the world. Summary The newly redesigned Apache HAWQ is loaded with powerful new features and functionalities designed to provide maximum value to practitioners. It allows administrators to: For end-users, HAWQ aims to provide the required SQL analytics capabilities to get the most out of data in Hadoop. It provides a result of the leading Hadoop Native SQL Database which delivers actionable insights to more people in the enterprise.