JMeter is a framework of Apache. It can use as a load testing tool for analyzing and determining the performance of a variety of services with a focus on web applications. Its latest version is 5.1 which was released on 19 Feb 2019 and, its first version was released in 1998. it uses Apache license 2.0. It is developed in Java and developed by Apache software foundation.

Performance Test: This test generates the best possible performance of the system or application under a configuration of infrastructure. Very fast, it also points the change need to be made before the ultimately Application goes into production.

Load Test: This test is useful for regulating and introducing the system under the top load it was trained to work under the process.

Stress Test: This test tries to break the system by destroying its resources.

There are some important features of JMeter which are given below:

JMeter imitates the number of users send the request to an appropriate server which shows the performance of a proper server through tables, graphs, etc. The figure below depicts this process:

How to install J Meter

1: In GUI Mode: there JMeter runs on a client computer

In Windows – Firstly, open Apache-JMeter-2.11 folder, click on the bin folder, and then click on JMeter.bat file will open v2.11 JMeter application. Shown in the following the figure: 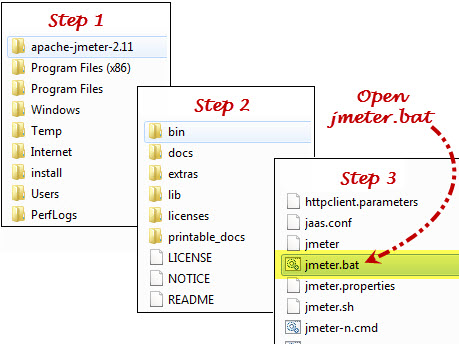 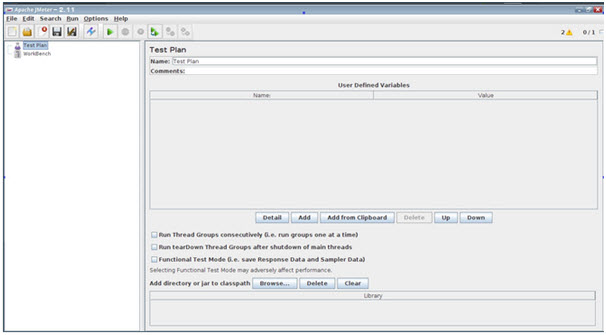 2: In Server Mode: JMeter runs on the server computer:

It is fundamentally a client-server model distributed testing mode. In this activity, JMeter runs on the server computer as a server component.

If we want to start JMeter in server mode, run the bat file: bin\JMeter-server.bat.

shown in the figure below:

If we open JMeter in a GUI(Graphical user interface) method, it takes more memory space to open it.  If you don’t want your computer to consume more ways to run JMeter, then you can open JMeter in command line mode according to your choice.

Write this command in a command line prompt:

JMeter–n: Shows that JMeter will run on the command line approach.

-t testPlan.jmx: Name of the file contains the Test plan.

– log.jtl: Shows the log files which carries the test result.

The  Test Plan element of JMeter

There are some common elements of JMeter:

Test plans: Test plan is a body of JMeter, which describe the sequence of steps run at a time.  A final test plan is made up of one or many Thread Groups, Sampler, logic controllers, listeners, timers, assertions, and configuration elements. Each Sampler can be introduced by one or more Pre-processor element, proceeding by Post-processor element, or Declaration element. It saves in “Java management extensions” (JMX) format.

Thread Group: Thread Group is the beginning stage of a test plan. The name, thread Groups, constitute a group of Threads. Under this group, each thread replicates one real user requests to the server.

A control on a thread group makes it possible to set the number of threads on each group. Also can control remaining time and the  test repetition. 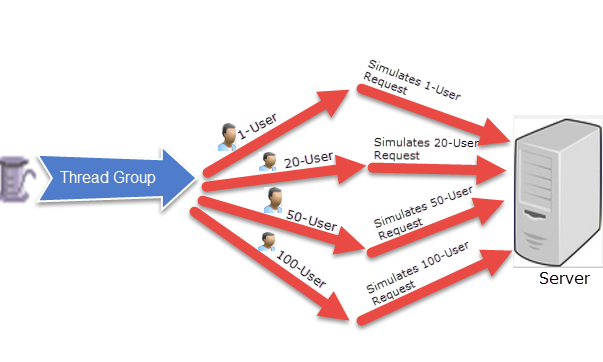 There are two types of controllers:

Samplers make easy JMeter for delivering specific types of requests to the server. It simulates a user’s request for a page from the target server. So that, to avail POST, GET, DELETE functions on an HTTP service, user can add HTTP Request sampler. Aside from HTTP Request sampler, there are some other simpler too

Logic Controllers determine the order of processing of Samplers in a Thread. It recommends a technique to control the flow of the thread group. Logic Controllers facilitates to accommodate the logic that JMeter uses to resolve when to send requests. The logic controllers can change the child element.

Logic Controllers of  JMeter are:

Test Fragments: Test Fragments is a different type of element detects at the same extent as Thread Group element. It is differentiated from a Thread Group in that it is not performed unless it is referenced by either a Module Controller or an Include Controller. This element is honorably for code re-use within Test Plans.

Listeners: Listeners ease viewers to view Samplers result in the structure of tables, graphs, trees or simple text in some log files and also give pictorial access to the data composed by JMeter about those test cases as a selection component of JMeter is executed.

Timers: We are using threads, controllers, and samplers then JMeter will blast your application with nonstop requests, To perform load/stress testing on your application. It is not the real domain or attribute of the actual traffic. JMeter thread sends a request without stopping between each sampler. This not as well as you want. We can sum a timer element which will permit us to define a period to wait between each request.

Types of timers are:

These are some mainly used configuration elements in JMeter,

A Pre-Processor element is executed before the request constructed by the sampler. If a Pre-processor is appended to a sampler element, then it will achieve just preceding to that sampler element running.

A Pre-processor element is used to improve the settings of a sample request just before it runs, or to update variables that are not disengaged from response text.

This  is a list of all Pre-processor elements provided by JMeter:

A Post-processor element is executed after a sampler request has been generating. If a Post-Processor is attached to a Sample element, then it will execute just after that sampler element runs.

A Post-processor is most commonly used to process the response data, for example, to extract a particular value for future purpose.

Some of the Post-processor elements provided by JMeter are below:

Any application or web server has a supreme load capacity when the server gets overloaded       afar its load capacity, and it will start responding slowly and generate errors. In JMeter, Stress    Testing is useful to resolute the maximum load the web server can hold.

How to use Assertion in JMeter

What is assertion: Assertion means mainly that your server under test returns the expected result.

The response declaration lets you add pattern strings to be estimated against various fields of the server response.

The duration Assertion tests that every server response was received within a given amount of time. Any reaction that takes longer than the given number of milliseconds is showed a failed intervention.

For example, a request is sent to “www.google.com“ by JMeter and get a response in less then expected time 5 ms then Test Case pass, else, test case failed.

The Size Assertion tests that each server hold the expected number of a byte in it. You can describe that the size can be equal to, higher than, less than, or not equivalent to a given amount of bytes.

JMeter sends a request to “www.google.com“ and gets response packet with size less than expected byte 5000 bytes a test case pass. If else, test case failed. 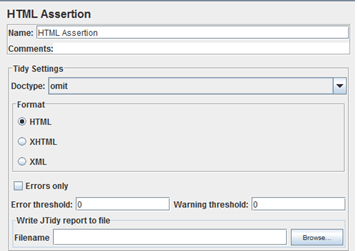 Steps to use Response Assertion:

In this test, we are just using Response Assertion to generate the response packet from “www.google.com” meets your assumed string.

It is the roadmap for this test:

The response assertion control panel let you add pattern strings to be compared in opposition of various fields of the response.

JMeter Function is mention as particular values that can occupy fields of any sampler or another element in the test tree.

Syntex of function in JMeter:

Here “__functionName” matches the name of a function and Parentheses edged the parameters sent to the function.

If a function parameter accommodates a comma, then be sure to escape this with “\,” else JMeter will behave it as a parameter delimiter.

Another resembles to use a simple test plan to test the regular expressions. The Java Request sampler can be used to generate a sample; otherwise, the HTTP Sampler can be used to load a file. Add a Debug Sampler, and a Tree View Listener then changes to the regular expression can be tested quickly, without the desire to access any external servers.

Adding Elements with Hotkeys in JMeter:

When you do earnest scripting with JMeter, there is a way to add elements to test plan briskly with keyboard shortcuts. Some Default bindings(shortcuts) are below:

The binding above is considered for Windows QWERTY keyboards. For other platforms and keyboards assure you adapt those values.

To change these binding, please find “gui.quick_*” properties within JMeter. Properties file as an example, it is approved to put overrides for them into the user — properties file.

Elapsed time:  J Meter measures the expire time from just before sending the request to just after the last response has been received. JMeter does not include the time to deliver the intervention, nor does JMeter process any client code, e.g., JavaScript.

Latency: JMeter measures the latency just before sending the request to just after the first response has been received(completed). Thus the time includes all the processing needed to reunite the application as well as assembling the first part of the reaction, which in general will be longer than one byte.

Connect Time: JMeter measures the time that it took to empower the connection, including SSL handshake. Note that connect time is not approximately deducted from latency. In case of a connection error, the metric will be equal to the time it took to face the error, for example, In case of Timeout, it can be equivalent to connection timeout.

The Future of JMeter

I hope to see JMeter’s proficiency fastly expand as developers take advantage of its eligible architecture. The main goal of the developments will be: