What is Apache Storm?

The storm is a free and open source distributed real-time computation framework written in Clojure programming language. Apache storm is an advanced big data processing engine that processes real-time streaming data at an unprecedented (never done or known before) Speed, which is faster than Apache Hadoop. Apache Storm works for unbounded streams of data in a consistent method.

It reads an unrefined stream of immediate generated data from one end and passes it through a sequence of small processing units and outputs the processed /useful information at the other end. The following diagram shows the concept of topology.

Hadoop and Apache Storm frameworks are used for analyzing big data. Both of them complement each other but differ in some aspects. Apache Storm performs all the operations except persistency, while Hadoop is good at everything but lags in real-time computation. The table compares the attributes of Storm and Hadoop.

Use cases of Apache Storm

Some use instances: real-time analytics, online machine learning, continuous computation, distributed RPC and ETL. Some of the use cases are as follows-

Why should we use Apache Storm?

It allows us to cooperate with a cluster and includes retrieving metrics data and configuration information as starting and stopping topologies.

Storm architecture is closely similar to Hadoop. However, there are some differences which can be better understood once we get a closer look at its cluster- 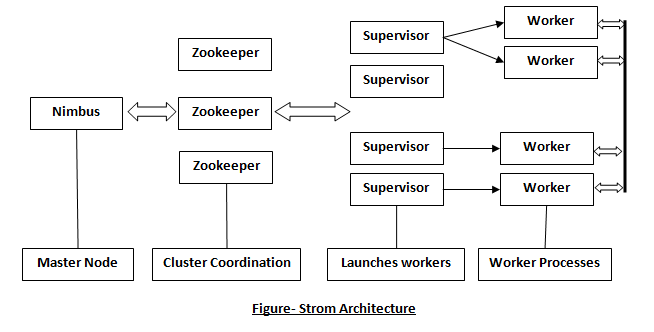 Node: There are two types of node in a storm cluster similar to Hadoop.

The master node of storm runs a demon called “Nimbus” which is similar to the “: job Tracker” of Hadoop cluster. Nimbus is responsible for assigning the task to machines and monitoring their performance.

Similar to master node worker node also runs a daemon called “Supervisor” which can run one or more worker processes on its node. Nimbus assigns the work to the supervisor and starts and stops the process according to requirement. Hence, it can’t manage its cluster state it depends on zookeeper.

It facilitates communication between nimbus and supervisor with the help of message ACK, processing status, etc. 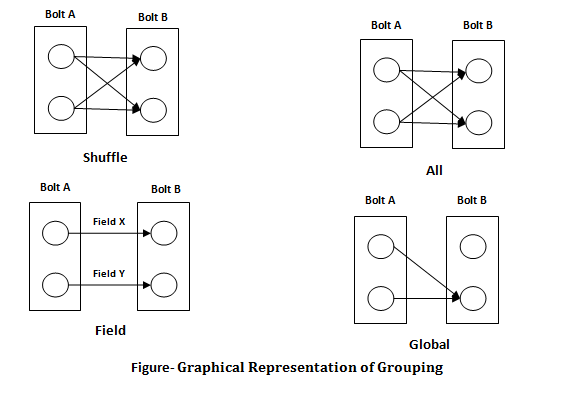 Let’s take a close look at the workflow of the storm.

There are two modes in storm cluster-

Local Mode- In this mode, we can modify parameters that enable us to see how our topology runs in a different storm configuration environment. It is used for development, testing and debugging.

Production Mode- In this mode, we submit our topology to working storm cluster which is composed of many processes, which is running on a different machine. The cluster will run indefinitely until it is shut down.