What is Google Go?

Google Go is an open-source programming language designed at Google by Robert Griesmer, Rob Pike, and Ken Thompson. Go is syntactically similar to C language; in addition to memory safety, garbage collection, structural typing and CSP style concurrency. It has a rich standard library. It initially developed in the year 2007 and launched in November 2009. It is updated recently on April 11, 2019.

Google Go is also termed as Golang. Golang is the implementation of assembly language (GC) and C++` (gccgo).

For Go programming language, one should be familiar with C programming. If you are good at C, then it would be easy for you to understand the concept of Go programming. I have tried to make this tutorial easy and start it from scratch level.

Some of its essential features are as follows-

Some of its features are excluded intentionally to keep it concise and straightforward.

Some of the Go’s  excluded Features are-

The basic structure of Go programs contains the following parts-

A Beginners Guide to Go installation Step by Step

You can find the setting for environmental variables on the “advanced” tab of the “system” control panel.

Check Go version- You can check the version of the Go language by using go version command.

We can write Go code on any basic editor in any desired directory and save it with extension .go

Save it with the extension .go. I saved it as First.go

Have a look at the following image. 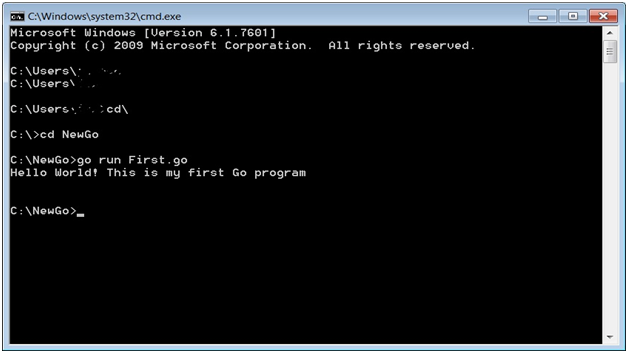 Our program for easy maintenance categorizes packages. Every file of Go program belongs to some packages. Each Go program must have “main” package.

Package’s name should be written in lowercase letters. If a package is changed and recompiled, all the client’s programs belong to that package must be recompiled too.

Import is used to import any package from the library. A Go program is linked to the different package through the import keyword.

We can import multiple packages by a single statement, Like-

We can use one more way-

Data types represent the type of value stored in a variable, type of the value a function returns, etc.

There are three basic data types in Go-

Some of its types are-

A String represents a sequence of characters (bytes). Various operations can be performed in a string like concatenation, extracting substring, etc.

It represents only two values either true or false.

Variables refer to a memory location for storing some value. The type parameter represents the value type that can be stored in the memory.

Once a variable is declared then you can assign the variable type value. You can also give an initial value at the time of declaration of the variable.

Multiple variables can also be declared in a single statement-

A Go program for understanding variables-

Constant Variable is declared by using the keyword “const”.  Value of constant variables cannot be changed if once assigned.

Loops are used to execute a block of code repeatedly according to the given condition. Most programming languages support three types of loop, for, while and do while.

Note: Go supports only for loops.

It is a conditional statement.

Go program for checking the given number is positive or negative-

The switch is also a conditional statement. Switch statement compares the conditions and evaluates a result.  Once a match is found, the statement associated with that case is executed. We can also add a default case to switch which will be executed if no other matches are found.

The break statement in Go-

An Array is a collection of elements which have the same types of data. The Array represents a fixed size and named a sequence of elements. An array cannot have an element with two different data type. We can’t change the size of an array if once defined.

Each array element can be assigned value as-

Index of array starts from size 0 to 1

We can assign the values to array at the declaration time-

This will create a slice name from an array with elements at the index start to end -1.