In any subset S when the two vertices are not adjacent to each other, such a subset of vertices is called an independent set. 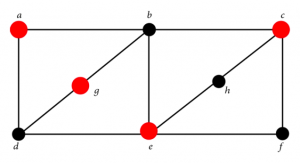 Relation between other graph parameters

A set is independent if and only if, its complement is a vertex cover. The sum of the size of a minimum vertex cover ?(G) and the largest independent set ?(G) is equal to the number of vertices in the graph.