WPF is the abbreviation of the Windows Presentation Foundation. The main goal behind the development of the WPF Framework that the user able to build a rich user interface. User Interface may consist of 3D, theme, animations, vibrant color with low complexity. WPF produces a user-friendly graphical display system for windows.

WPF is a new framework introduced with ‘.Net Framework 3.0′, which allows the user to write programs more efficiently and flexible.

In the case of traditional ‘Graphical Device Interface,’ i.e., GDI form application, not possible to use advanced graphics capabilities. Therefore, the windows application always be inefficient in comparison with WPF.

Why WPF Is Better Than WinForms in .NET

There is a list of several reasons to choose the WPF Framework:

Let us see the WPF Core Classes and it infrastructures elements in detail:

These classes called ‘Base Element classes.’ Base element classes offer a model for composing the user interfaces.

Following are the essential elements of WPF infrastructures:

Let us see these infrastructure elements one by one:

Example: Let us take a XAML code in which we displayed ‘Button’ prompting a message on it.

4. Layout and Panels: Layout and panels provide the exact positioning and sizing of the controls. It plays a vital role in the ‘process of composing presentation.’

Each pixel is device independent. Each element automatically scales as per the DPI setting. It uses ‘Double’ instead of ‘Float.’

6. Document and Printing: It provides better control over printing. It offers remote printing and queue facilities. Documents have three types as a fixed document, flow document, and XPS document.

Following diagram shows the architecture of the Windows Presentation Layer. 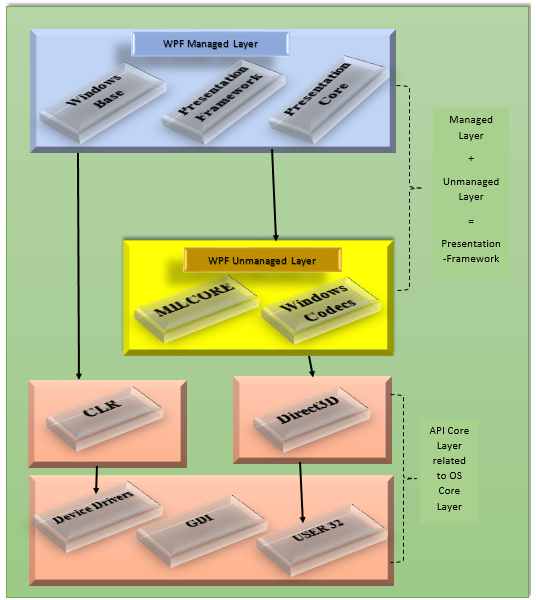 CLR itself manages all the managed code.

PresentationCode.dll is a low-level API and act as cover for MILCore. Besides, it provides the interface for MIL. It offers features like geometry, 2D, 3D.

The visual tree has the applications of optical/ visual elements.  PresentationCode.dll provides classes for generating a visual application tree.

The Unmanaged layer has two parts as

MilCore is the Media integration Library. It is part of the unmanaged layer. It allows the tight integration with DirectX. All the graphical and animation related controls done by DirectX.

It provides image support for WPF applications. WindowsCodecs handles the task such as Image display, scaling image, transforming the image and processing the image.

This layer has OS core components such as kernel, graphics card, GDI, USER32. To access the low-level API, the application uses these components.

It is a low-level API, and it provides all the capabilities regarding graphics and animation.

It manages memory and separates the processes.

It decides which element present at which position.

It is the primary API for WPF application.

GDI is a graphic Device Interface. It provides the expanded set of graphics primitives to the application.

WPF provides a lot of features. Following is the list of some essential features:

Let see the features of WPF Explain one by one.

DPI, i.e. ‘dots per inch’ plays a crucial role in gaming, printing and screen resolution (to display on screen). It becomes necessary to calculate the DPI or to know how many dots per inch (DPI) screen could draw for windows system. Usually, the count of DPI (how many dots per inch) the system could build is dependent on the hardware and OS in which the application runs. Besides, the DPI setting applied to that machine/ device. The user can easily customize a DPI setting and result in this application does not look good.

To overcome this drawback of the pixel-based approach, WPF makes the component/ controls independent of the DPI setting of the computer. Let us understand this through an example. 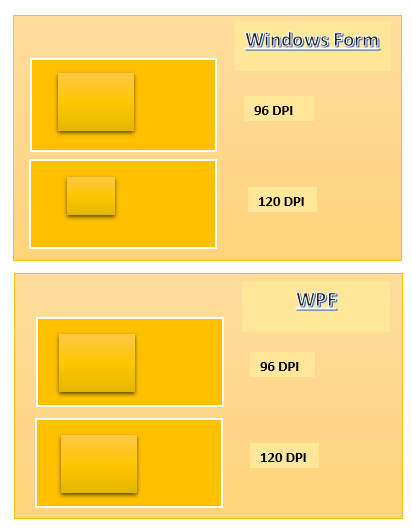 Let us see the diagram carefully, in the windows application when we change the DPI setting, size of the element (square) changed. The first form has a 96 dpi setting and the second has a 120 dpi setting. It is clear that in a pixel-based approach when the user changes the dpi setting it affects the size and looks of the elements present in the application form.

Whereas in the case of WPF, it uses a density-based approach. In the density based approach, when the density of pixel modified, then the elements adjust them accordingly without affecting the size and looks. Hence, the pixel in the WPF application is not device dependent.

2. Built-in support for graphics and animation

Microsoft DirectX Environment is a collection of API’s, which handles the multimedia related task. WPF applications embedded in the DirectX environment. Result to that, WPF adapts graphics and animation capabilities. DirectX has a separate set of API’s, which deals with graphics and animation effects. Graphics provided by DirectX is object-oriented and vector based. For example, when you draw an element like a circle in your WPF application, then you can easily remove it from the screen. As WPF application adapt the object-oriented concepts, it treats the elements as a separate object.

In the case of a traditional windows application, once you draw a rectangle or any element, you are not able to select that element individually. Thus, WPF has a very sophisticated and different programming approach from the traditional graphic approach.

WPF has massive flexibility in defining styles and control templates. CSS as the style- based technique is a set of definitions, which describes how the elements looked like when they placed on the screen.

In the case of a traditional windows application, style is the property tightly coupled with each control/ element.Therefore, for each component or control need to define color, size, and style separately to make it different.

In the case of WPF, styles separated from user interface elements. After defining style, you can set or change the look and feel of the control (UIelement) by putting style on that element.

4. Resource-based approach for every control

In a traditional based approach, defining the style is a very hectic job. If you have, a thousand buttons and want to apply color property on them. For that, you need to create 1000 objects of color. Moreover, assign each object of color to each element, i.e. button.

In the case of WPF, you can store animations, colors, styles or object as a resource. When the form loads itself, then each resource will, and you may associate those resources with UI element. Resource-Directory is a file in which you can maintain a hierarchy of styles. With the help of Resource-Directory, you can style the whole application.

Flow document: Allow you to adjust and content based on variables such as window size and device resolution.

XPS document:  XPS document is a paginated representation of electronic paper in XML based format.