It is an open source configuration management tool developed by opscode. It is written in Ruby and Erlang. It automates the configuration and maintenance of more than one server. Chef uses Domain Specific Language (DSL) for writing system configuration. Chef follows client-server architecture.

Why should we use Chef?

Large companies have a continually changing infrastructure that requires be configuring and maintaining time to time. Chef provides:

Advantages and Dis-advantages of Chef

It is the collection of engineering practice that provides a systematic way to manage entities for efficient deployment. These entities include code, infrastructure, and people.

You need to specify the configuration once on the central chef server and replicate that on thousands of nodes. Configuration management performs the following task-

There are two types of configuration management. 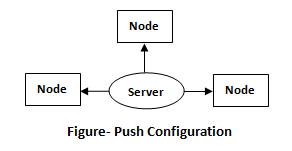 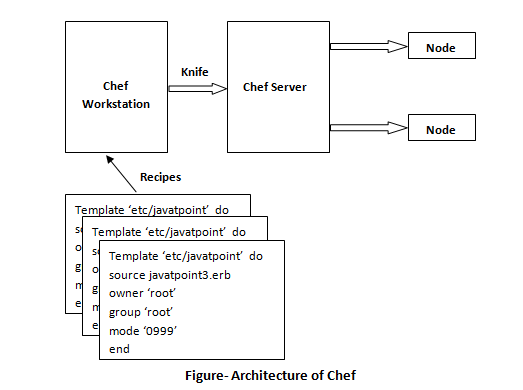 The server stores the cookbooks, the policies and configuration data. This is a centrally located server that holds all the data related to infrastructure. Chef runs in server-client mode. There are three types of chef server available-

Chef Solo- Solo removes the need of having a centralize chef server to test configurations on nodes. It is a kind of local deployment. Functionality wise, Chef Solo is very similar to Hosted Chef. However, in Chef Solo, you don’t have any limitation of nodes.

Open Source Chef- This is completely free an open source can be installed anywhere. Its functionality is similar to Hosted Chef. This also ensures that the open source Chef server remains as the local infrastructure and supports upgrades.

Hosted Chef- You are free from the repository of managing a central chef serves yourself. Hosted Chef is hosted by Opscode. It is software as a service (SaaS) offering. It provides full scalability, all-time availability of resources, and resource-based access control.

A repository is a place where every configuration component of central chef server is stored. Chef repository can be synchronized with the chef server.

Chef client act as a thick client means it does most of the heavy lifting. Chef client periodically contacts to central chef server downloading required configuration applicable to node compiling those configurations locally on the node. It establishes communication with the central chef server. Following are the functions performed by chef-client:

Infrastructure as code is a type of infrastructure where the operation team manages the code rather than a manual procedure. It makes policies and configuration management more straightforward and more efficient.

Suppose that you are a system administrator in a company and you need to set up a server and install 25 software applications over it. This process will take too much time to install manually. Let us consider you have a code for installing software rather than doing it manually.

These are the key segment contain qualities and data about the coveted condition of a node. Specifies the resources to use and the order in which they are to be applied. The cookbook is the most important and reusable component of a Chef Server. The cookbook is the basic unit used to define rules and regulations for configuration purposes. It contains the recipes that have all the specifications of resource management and also, it has the order of application of resources. It includes the procedure to reuse the collection of resources. 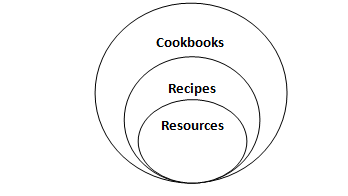 Template: It is similar to files, but it is not static. The extension of these files is .ebr, which means they conation embedded Ruby. The template is used to update and make the existing file.

Attribute Values: Attribute value used in the cookbook. There are different kinds of attributes that can be applied with a different level of precedence over the final setting that the node operates under.

Definition and Resources: there can be multiple resources in a recipe which will help in configuring the infrastructure

File Distribution: it contains any static file which will be placed on the chef nodes that uses the cookbooks. A recipe can be declared as a resource that moves the files from that directory to the final node. For example cookbook, file, service, package.