Puppet is nothing but configuration management tool — puppet used for deploying, configuring and managing the servers. Puppet enables the system administrators to work faster and smoother with the help of automation.

What exactly Puppet does?

There are many Puppet features as follow: The puppet used by more than 30,000 companies worldwide including Google, semen's, and Red Hat, etc. the universities like Harvard law school, Stanford are using Puppet software. Almost 22 new organizations per day use Puppet for the first time. 2. Large Developer Base Puppet has many contributors to its core source code. 3. Long Commercial Track Record Puppet has used commercially, since 2005. Puppet keeps on improving and refining. Puppet has deployed in an extensive infrastructure (machines 5000+), scalability and performance lessons learned from such projects and applied to puppet by the Puppet developers. 4. Documentation Puppet has a website with hundreds of pages of documentation maintained by the community of users, adding content and modifying it, is allowed to the user who is part of that community. (Website) It also contains comprehensive references for both languages and resource types. Besides, it is easy to find out the solution for your puppet problem because multiple mailing lists discussed here actively. It has a popular IRC (Internet Relay Chat) channel. IRC is an application layer protocol that provides ‘communication in the form of text.' Client-server network model used to work the chat process. 5. Platform Support Puppet runs on that operating system, which supports Ruby. Example are windows, Linus, CentOS, etc. It runs on new as well as outdated operating system and runs on Ruby versions too. To go into the details of Puppet, first understand the concept of configuration management, need of configuration management.

Usually, System Administrators perform repetitive tasks like installation of servers and configuration of servers, etc. System admin can automate those tasks by writing the script for them. It will be useful in case of a small organization (having small infrastructure) whereas, in the case of organizations having large infrastructures, it becomes a tedious job to write the script. Configuration management is the solution to such problems. Configuration management is the practice of handling changes systematically in the system so that system maintains its integrity over time. For project management and the audit process, configuration management allows access to the accurate historical record of the system state. Configuration management overcomes the following challenges: Let us understand the importance of Configuration Management through Use Cases: The best example to explain here is the NYSE, i.e. New York Stock Exchange. A ‘software malfunction/glitch' has prevented the New York Stock Exchange from trading stocks for almost 90 minutes. This leads to a loss of millions of dollars. The new software installed on ten terminals out of 24 trading terminals. Those systems were tested the night before. Whereas in next morning, ten terminals failed to operate correctly. The new software installation put the NYSE into this problem. There is a need to uninstall the latest software from terminals and switch to the old one. In this scenario, possibly to you may think that the configuration management process of NYSE gets fail to manage it. Configuration management process recovers the NYSE in 90 minutes only, which is very fast. 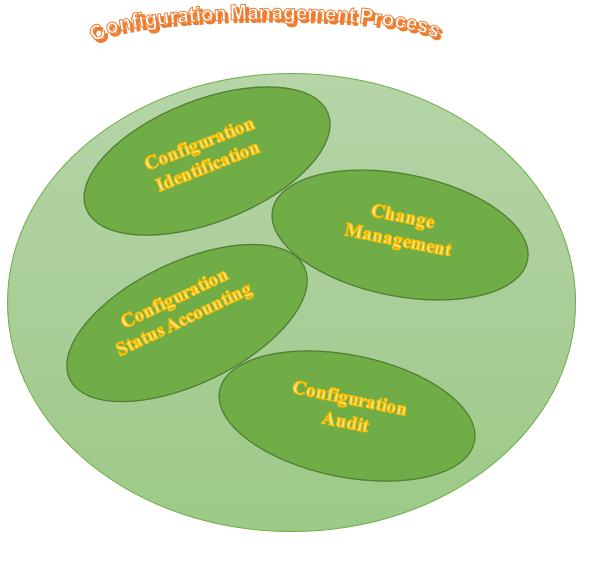 Let us see each process in detail:
Configuration Identification is the process where multiple activities like labeling, identification, grouping and labeling revision do for the configuration item. 2. Change Management It is the change management process. This process handles the changes systematically either change from the individual perspective or organizational perspective. 3. Configuration Status Accounting Configuration status accounting includes the following activities: 4. Configuration Audit Configuration audit, able to find the degree at which the current state of the system is consistent with the latest documentation and baseline. Whereas it is, a formal review to confirm that product delivered on time and will work adequately as promised to the customer. It uses the information, which is the outcome of a configuration audit and cross check it with the output of configuration status accounting to ensure that the required product built.

Puppet architecture follows Client-Server/ Master-Slave architecture. Puppet Client and Server communicate with each other through SSL (Secure Socket Layer) which is a secure encrypted channel. 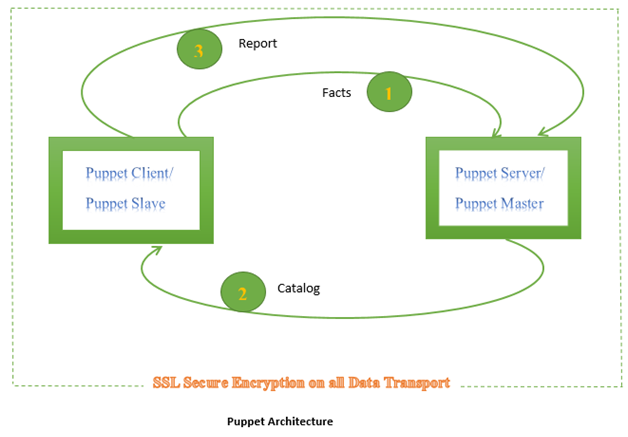 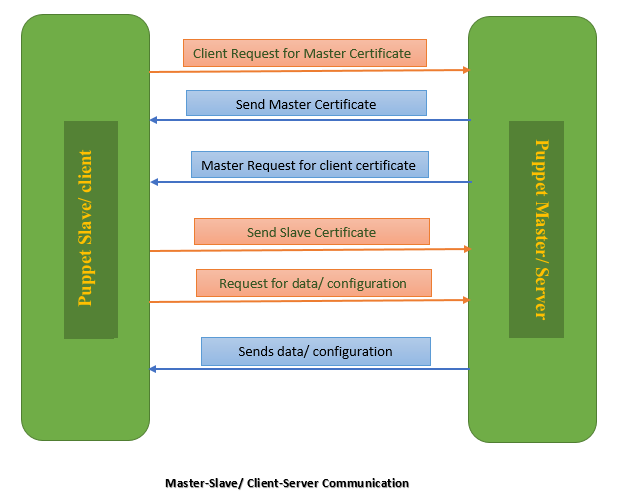 As the diagram depicts communication between client and server.

Collection of manifests and data forms puppet module. Data can be facts, file or Templates. The module has a specific directory structure. Modules help in organizing puppet code. Modules allow puppet code to split into multiple manifests. Modules are nothing but self-contained bundles of data or code. 3. Resource Resources are the basic unit of system configuration modeling. Each resource defines some aspect of the system such as a specific service or package. 4. Factor Factor gathers facts or necessary information about puppet agents such as operating system, IP address, Mac address, hardware details, network settings, SSH keys and many more. These facts present in the manifests of the puppet master, available as a variable. 5. M-collective M-collective is a framework. This framework allows multiple jobs to run/ execute on various puppet agents in parallel. This framework performs numerous functions as follows This framework interacts with a cluster of puppet agent, whether in large groups or small groups. This framework attaches filters with the request. This framework uses the broadcast paradigm to send requests to puppet agents. When all agents receive offers at the same time, only those agents start responding to the request whose filters matched with the filters attached to the request. To call the remote puppet agent, M-collective uses simple command line tools. It writes custom reports about infrastructure. 6. Catalogs Catalog defines the desired state of each resource on slave managed by the puppet master. It describes the relationship between resources. It defines compilation for all slaves, which controlled by the master. The puppet master compiles the catalogs through modules (Manifests + data). Master serves the compiled catalog to the puppet agent on its request.

Let us see the application of puppet through a case study. Have you played online games ever? Then, you must have heard about Zynga. Zynga is the world's most famous and sizeable social game developer. Zynga has an extensive infrastructure. Zynga uses tens of thousands of servers on both public cloud and private data centers. On early days, Zynga using a manual process, Kickstarter and post installs to get hundreds of servers online for configuration management. Now, will see how Zynga faces problems like Scalability and consistency, issues related to the portability of infrastructure, flexibility problems, infrastructure insights problems, at the time when they were using manual process and Kickstarter: Zynga was experiencing fantastic growth and needed to scale-up its infrastructure. Manual approaches and script based solutions were not capable of meeting their requirements. As the property of each game is different from others, it becomes critical for the team to fix the correct configuration to each machine quickly. Zynga required the new way so that it can achieve consistent configuration management approach in both public cloud and private data centers. For the excellent infrastructure, it is necessary to visualize the properties of each machine automatically. Zynga realizes the need for the automated process before them scale-downs. The result of that puppet came into the picture. Now, will see how puppet plays a role in Zynga. Speed of Recovery Deployment speed of production team increased to deploy the right configuration to the right machine. If system configured inappropriately, then puppet will revert the system to the last desired state. Speed of Deployment The operation team delivers the services in the significant ‘time-savings,' provided by the puppet to the gaming studios. Consistency of Servers Puppet has a model-driven framework, which ensures the consistency of servers. Puppet delivers the consistent configuration across Zynga's servers in a short period using significant ‘time-savings.' Collaboration As puppet has a model-driven framework, easily share the configuration across the organization. Puppet ensures the new service delivery is of high quality by allowing to the operation team and developer team to work together. Reference: https://en.wikipedia.org/wiki/Puppet_(software) https://puppet.com/ https://puppet.com/products/how-puppet-works