IoT Tutorial | What is Internet Of Things

Internet of Things can be defined as, a network of physical objects that are integrated into the software, electronic devices, and sensors, allowing these objects to collect and exchange data.

The goal of IoT is to extend Internet connectivity from standard devices such as a computer, mobile phone, and electronic devices. IoT makes virtually everything "smart" by improving certain aspects of our lives with the power of data collection, artificial intelligence algorithms, and networks.

For Example: Let's take the example of Home automation. Suppose, your family goes out for a holiday, and by mistakenly the machine was left switched on. In that case, without IoT, we had no option, and this could also result in the damage of the appliance. But, with the help of IoT, the appliances can be controlled with the help of your mobile or computer, and it can be switched ON or OFF at any time and from anywhere.

The term "Internet of Things" is in existence since twenty years. But the real idea of connected devices has existed for longer, at least since the 70s. At that time, the idea was often called "integrated Internet" or "generalized computing". The term "Internet of Things" was invented by Kevin Ashton in 1999 while he was working with Procter & Gamble (which was later MIT's Auto-ID Centre). Kevin Ashton, who worked on supply chain optimization, wanted to draw senior management's attention to an exciting new technology called RFID. Because the Internet was the most popular in 1999 and it made sense, he called his presentation of the Internet of Things. 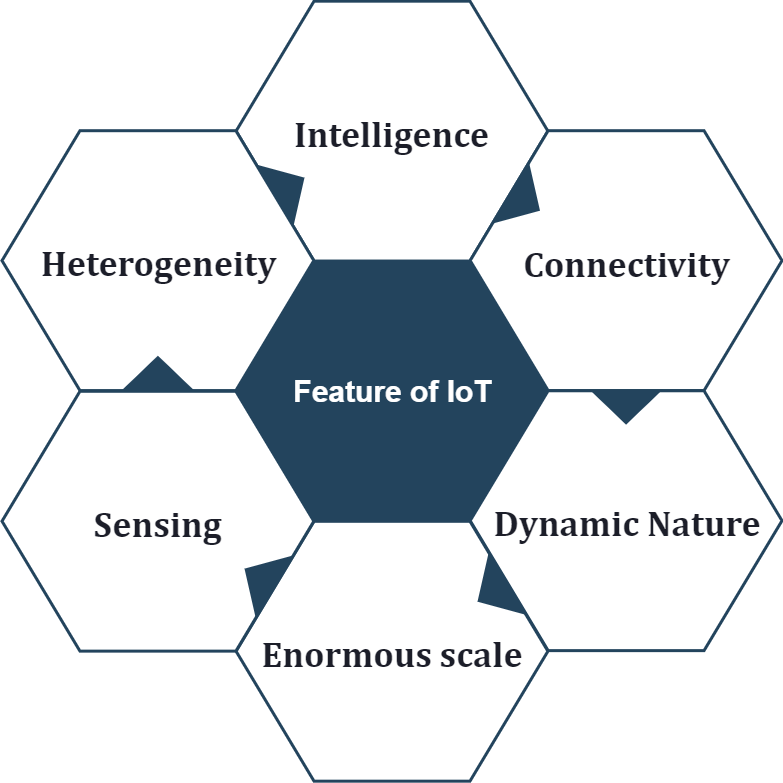 IoT comes with the combination of algorithms, computer, software, and hardware that make it smart. Environmental information in IoT enhances their capabilities, enabling them to respond intelligently to a given situation and helping them to perform specific tasks. IoT intelligence is not seen as a means of interaction between devices, while the communication between users and devices is achieved through standard input methods and a graphical user interface.

Connectivity enhances the Internet of Things by bringing together objects from everyday life. The connectivity of these objects is essential because simple object-level interactions contribute to collective intelligence within the IoT network. It allows network accessibility and compatibility in things. With this connectivity, new opportunities for the Internet of Things can be created by networking smart objects and applications.

The main activity of the Internet of Things is to collect data from then environment, achieved by the dynamic changes that occur around the devices. The status of these devices dynamically changes. For example, sleeping and waking up, connected and disconnected, as well as in the context of devices or appliances, including temperature, location, and speed. In addition to the device state, the number of devices also dynamically changes with a person, a place, and a time.

The number of devices to be managed and communicating with each other will be much higher than the number of devices connected to the current Internet. The management of data generated from these devices, and their interpretation for application objects becomes more critical.

Gartner, Inc. confirms the considerable size of the IoT in the estimated report.The report indicates that 5.5 million new things will be connected each day and that 6.4 billion connected things will be in use worldwide in 2016, an increase of 30% per year percentage since 2015. The report also predicts that the number of connected devices will reach 20.8 billion by 2020.

IoT does not work without sensors. A sensor detects or measure changes in the environment. It generates data that can inform its status or even interact with the situation. Sensing technologies creates capabilities that reflects real awareness of the physical world and the people who make it up. Sensing information is simply the analog inputs of the physical world, but it can provide a rich understanding of our complex world.