In the size metric, we have learned to measure/ determine the size of a program by various software metrics such as line of code, Function count, and Token Count.

Data structure metrics are based on the pre-stored data (input, internal, and output data).

It's all about data; we have to find out "how and which data is arranged (linked) in best possible way," Suppose there is two software planner (A and B) having input, internal and output data and find VARS (count of variables).

N2 and n2parametersare robust and best, to sum up, all the computations in the software.

Even changes in algorithm and computations are calculated effortlessly with them.

Definition -"A total amount of data used as input, that is processed in and produced output from software is called data structure metrics."

Most data metrics focus on the variables and constant within each module but not on input/output dependencies.

In the data structure, we will discuss the following points related to data.

Usage of data within a module

In this, we understand how data is used in a module itself.

Live variable – "A variable is live at certain point if it holds the value that is required in future or the value may be read before the next time the variable is written to."

"A variable is live from its first reference to its last reference within a module or procedure or program.

For example: Suppose in a program variable is declared names like 'x.' Value assigned to x variable will be live until another value is added. 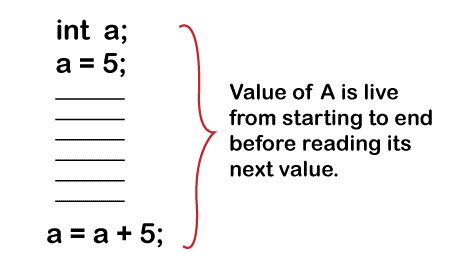 Some misconception about live variable are:-

For example: In this program, two variables are declared (

We can read variable 'a' from starting to end, but variable 'b' is live only once in the program (at the time of declaration).

LV = sum of the count of the live variable of each statement/ count of executable statement.

Example: Find out the average number of a live variable? 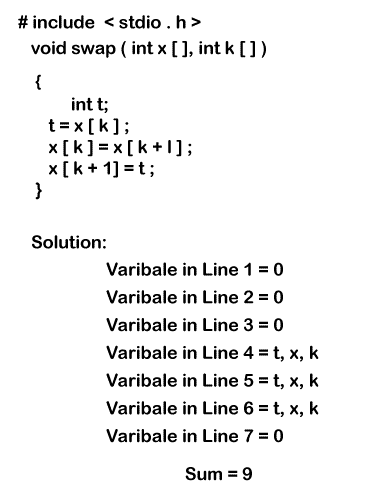 A variable span is a metric that captures "how often a variable used in a program." The life span in a program or module of a program is called its span(SP).

The size of the span indicates several statements that pass between successive uses of variables. 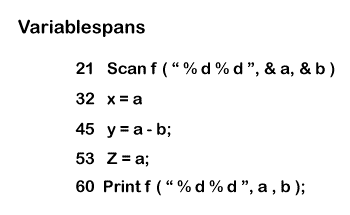 Here's a program code from line 21 to 60 containing live variables a & b. In between statement from 21 to 60 doesn't deal with a & b variable.

Number of reference of 'a' variable = 5

Number of reference of 'b' variable = 3

Therefore variable 'a' is used more. 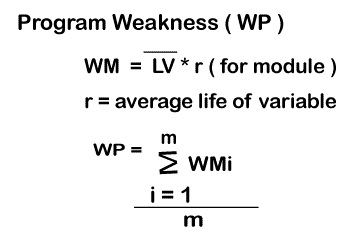 How to track software metrics?

As we know, software metrics act as a backbone in the software development process.

Despite all the merits, software metrics can distract software developers from goals such as delivering useful software and increasing customer satisfaction.

This data collection of software measurement metrics is more critical because work on the software is done based on collected data.

The presence of these characteristics in software metrics can assure of delivering good quality software to the customers.

Because of this, software development platforms that automatically measure and track metrics are essential.

But the significant risk of having too much data for measuring leads to errors for the software development team.

1. Software metrics are linked to goals

To achieve a standard quality of software, specific goals are achieved by the software development team.

Therefore software metrics like reducing lines of code, removing some bugs reported, increasing task completion time, and some software iterations are linked to the goals such as improving software usefulness and user experience.

For example, the LOC (line of code) metric is a size-based software metric indicating coding complexity or software efficiency.

So, to reduce complexity, software developers write more functions with few lines of code to achieve the target.

Therefore it stated that to achieve a particular goal, the software development team choose the software metric and align metrics with these goals.

The result of software metrics measurement is in simple numbers that are easy to compare. These resulting numbers are essential for the management because they make it easy to declare the success of getting metric software target.

When the software development team does not reach these set numbers, it states its failure to reach the target. These clarified goals or target doesn't reflect how software metrics are trending.

When software development teams measure the software at once, that may result in failure of reaching the target.

To solve this software development team break the measurement periods into smaller time frames to determine how well the software metric is working.

4. Don't use such a metric that doesn't lead to progress.

The main focus of using software metrics should be a software improvement, but when repeating actions result in no change in solving errors, then goals are not achieved.

If software developers keep doing the same thing that's not getting them closer to close, it reflects that they are focusing on software metrics that don't lead to any change.

Therefore software development and management team have to focus on such metrics that progress towards goals and improvement.