As a convention, our first R program will be the “Hello World!” program. We can run our R program either at R command prompt or we can use an R script file. Let’s see both one by one.

To start your R program in Windows command prompt, just go to this path C:\Program Files\R\R-3.5.2\bin and type the R at your command prompt. Or you can set the environment variable.

This will start the R interpreter and you will get the prompt > where you can start typing your program. 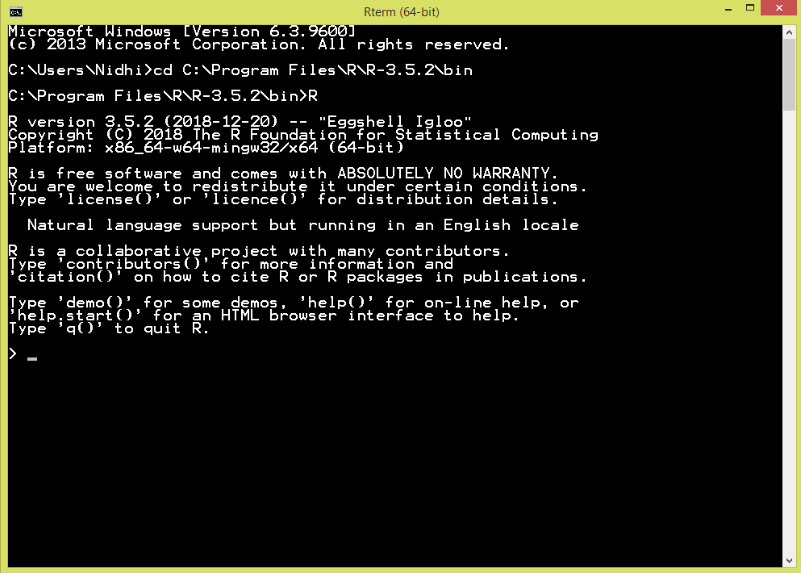 Program to print “Hello World!” in the command prompt:

We can also use script files to write our program and then execute this script file at your command prompt with the help of R interpreter called Rscript.

First of all, write the below code in a text file using any text editor like notepad and then save this file with the .R extension. Such as hello.R; if you do not set the environment variable, then you have to save this file in the bin folder of R.

To execute this script file use the following command at your command prompt. If you are using Linux or another operating system, the syntax will remain the same:

When we run the above command, it produces the following result:

As we know RStudio is an open source IDE (Integrated Development Environment) for R programming language.

In RStudio, we can use the console to run command or we can also create a Script file.

To create a hello world program through the console of RStudio, just type the following line of code in the console:

The output will be:

You can also create a script file in RStudio:

Now, you can see the R Script editor where you can type multiple lines of code and save your R program.

Copy the following code in your script file. And save it with .R extension.

To run this program press “Ctrl+A” to select all three lines of code and press “Ctrl +Enter”.

The output will be displayed at RStudio console. 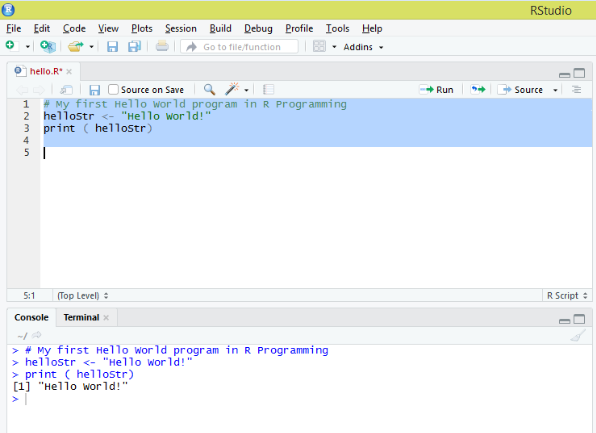 Note:-To clear the console of R or RStudio uses the following command: