Introduction to Tableau: Intellectual, strategic, smart and real-time decision making is a must for the development of any organization. Previous years, all those decisions made by revising, analyzing documented reports also by comprising all the data. It becomes a tedious job, poring over the reports and spreadsheets repeatedly to get on the conclusions.  Data visualization becomes popular in recent years. Data visualization make decision-making process efficient. Visualizing the data in graphical or pictorial form increases the productivity because using images, charts, graphs it becomes easy to visualize, study and understands the data.

Meaning of the word "Tableau"

Tableau: It represents the scene from history or story using motionless figures or with a group of models.

Tableau is a data visualization tool and that used in business intelligence. It merely converts raw data into an easily understandable format. 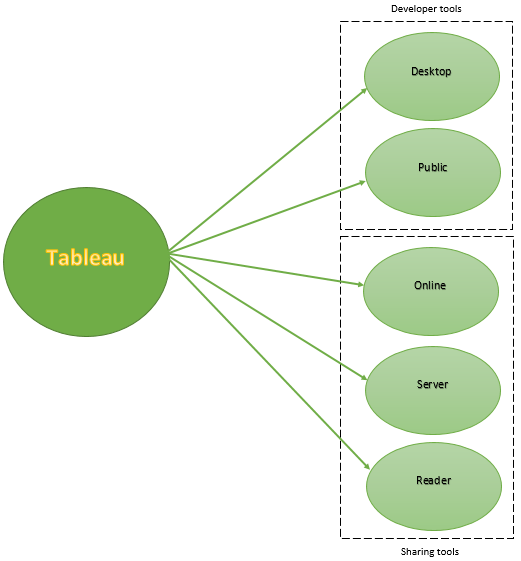 This product used for creating smart visualization, for generating data stories, for the creation of workbooks, for data analysis and many more. This tableau desktop product allows users to code and customizes the reports. The user can create charts, reports and combine them all together to form a dashboard. All such a necessary and important work were done at this product. The Workbooks and dashboards can either shared locally or publicly, but the workbook and dashboard must be created on the desktop. For performing live data analysis, Tableau Desktop provide connectivity with different kinds of data sources such as data warehouses, various types of files. The user can store their reports, workbooks, and dashboards on the tableau server and work with it by merging them on the system browser. Tableau reports, visualization, dashboards can be accessed even via mobile devices. Tableau Desktop classified into two groups, Tableau Desktop Personal and Tableau Desktop Professional based on ‘connectivity to the data sources' and ‘publishing option.'

It is the analytics platform present on the cloud. Tableau online is similar to the tableau server, but the data stored on the server which hosted on the cloud and that cloud maintained by Tableau group. Tableau Online can be accessed from anywhere and from any device. As Tableau online is a sharing tool, the user can publish and share data discoveries with anyone. There is no storage limit for storing or distributing data on the tableau online. To publish the data on Tableau Online, workbook needs to create on Tableau Desktop. Tableau Online supports the data streamed from web applications such as saleforce.com, google analytics. Tableau Online can create a direct link to multiple data sources such as MySQL, Spark SQL, Hive, Amazon Aurora, etc.

Tableau Server is a sharing tool used to share workbooks, visualizations across the organization but only those workbooks and visualization created at tableau desktop. To share the dashboards on tableau server, first, you need to publish your dashboard on to the tableau desktop. It is possible to modify the worksheets, visualizations and dashboards, stories using tableau server. The only licensed user can have access permission to access the work uploaded on the server. An authorized user can check the reports via web browsers using login credentials, no need to install the tableau server on their machine. Very high security provided to the Tableau server. Quick and effective sharing of data possible because of Tableau server. Tableau Server Administrator performs the following tasks:

The tableau has layered architecture. Tableau Architecture has the following components: Following diagram shows the architecture of Tableau 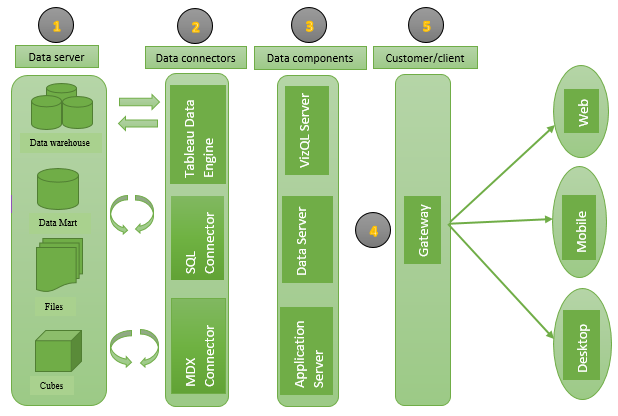 Let us understand each component in details

It provides a connection between the data server and external data sources, or data connector is an interface between external data sources and the data server of the tableau. Tableau has different connectors such as ODBC/SQL connector and MDX connector. ODBC connector can connect with any database without a native connector. Tableau work either on live data or extracted data or on both data simultaneously. In many enterprises, huge database updated periodically. That time enterprise needs to work on updated data or live data. In such a cases tableau works as front- end visualization tool. It can connect to external sources using dynamic MDX (Multidimensional Expressions) and SQL statements and creates a link for accessing live data. This feature links the tableau with live data whereas importing the data. Tableau can fetch the data from external data sources and build the local copy of that data known as tableau 'exact file'. It brings millions of records and store in a tableau data engine with a single click only. Tableau data engine uses the storage unit like RAM, ROM and Cache memory for storing purpose. Using filters tableau fetches a small amount of data from extract file or massive dataset, and this features increases performance of tableau.

Following elements are present on tableau server: Let us see these servers one by one a). Application Server The application server performs the following operations: b). VizQL Server It converts the queries into visualizations. When the VizQL server receives a request from the client, it sends a query directly to the data source and retrieves the information in the form of images. The result of this visualization forwarded to the client. Tableau server creates a cache of visualization that will reduce the load time. This cache can be shared with multiple users who have permissions to view that visualization. c). Data Server It manages the data from external sources. It is also known as the central data management system. It stores the relevant data details such as metadata, sets, parameters, groups.

Tableau desktop, web browser, mobile applications are the clients. Those clients can edit the dashboard and visualizations.