As we know, cryptocurrencies are digital assets which can also be exchanged between two parties. For securing, verifying the transfer of assets & to have control over the creation of new currencies, we use cryptography.

Except for digital currencies, the government printed normal currencies like the Yen, Yuan or Dollar. It specifies that there are centralized organizations or institutions which exist & create billion or millions, or thousands of currency. Unlike currencies created by the government, which the government does not make, they are created by applying mathematical formulas that make cryptocurrency work. Cryptocurrency works through distributed ledger tech that serves as a public financial transactions database and uses a decentralized control.

There are so many cryptocurrencies. Let's discuss a few of them. 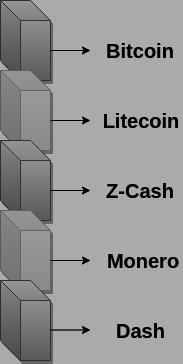 The first decentralized cryptocurrency we know is Bitcoin. It consists of many miners who have created the Bitcoin by creating a network of thousands of nodes. In Bitcoin, the network, miners process the Bitcoin transactions. Bitcoin is controversial as it doesn't have any governmental control over it but still controls multi-billion transactions worldwide. As of now, there are more than four thousand alternative or different types of Bitcoin which are available now.

Z-Cash is an Altcoin, and it belongs to the same category of cryptocurrency that shares similar characteristics with Bitcoin. Z-Cash is a privacy-protecting currency (digital) constructed on strong science in the field of cryptocurrency. It uses zero-knowledge proof, which makes all the transactions confidential. It verifies all the transactions without knowing any information about the amount transacted, receiver & or sender.

Z-Cash features known as payment disclosure & viewing keys make it possible to disclose or expose some of the users' transactions. The transactions which are made on Z-Cash are regulation compliant & auditable.

Monero is also a cryptocurrency, but it is an open-source cryptocurrency which focuses mainly on privacy, decentralization & untraceable. It is a private, secure digital currency & fast operated by thousands of users who are connected to a network. We can use Monero to sell & buy things & even exchange cash or currencies with different tokens or coins.

Monero uses a special kind of cryptography which helps it to ensure that all the transactions made on it are completely untraceable. Monero is harder to track because it focuses on anonymity, but Bitcoin is pseudonymous (in which transactions are traceable ).

Digital Cash's short form is Dash. Dash is open-source cryptography like Monero, but it consists of master nodes. Master nodes are the subset of users which create a decentralized autonomous organization. As we know, Bitcoin is the most promising alternative to Bitcoin is Dash. The transactions which are done on Dash are fast & untraceable.

Ethereum is a great Bitcoin alternative and is considered the first Bitcoin alternative. Ethereum has a decentralized software platform which enables dApps (decentralized applications) & smart contracts to run & built without any fraud, downtime, or interference from any third party or control. The main goal of Ethereum is to create a decentralized suit for financial products which can be accessed by anyone in the world, regardless of nationality, faith or ethnicity. Ether is a platform-specific cryptographic platform on which applications on Ethereum run.

Dogecoin was originally known as the meme coin, which caused a stir in 2021. The price of Dogecoin went like a skyrocket. The avatar of the coin uses Shiba Inu and it was accepted as a payment method by almost all companies such as Space-X, Dallas Mavericks, Kronos etc.