American brothers Wilbur Wright (16th April 1867 – 30th May 1912) and Orville Wright (16th August 1871 – 30th January 1948), also known as the Wright brothers, were considered to be the pioneers of aviation, for they inventing, building, and flying the world’s first successful motor-operated airplane, the Wright Flyer. However, there were some inventors who pioneered before the Wright brothers. 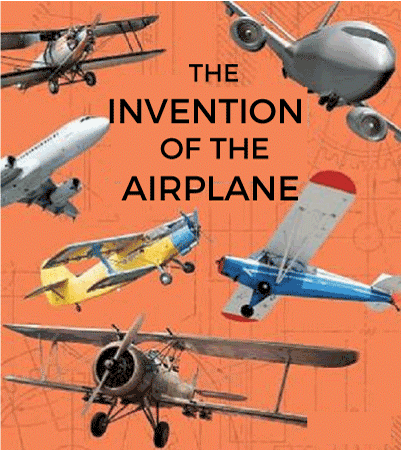 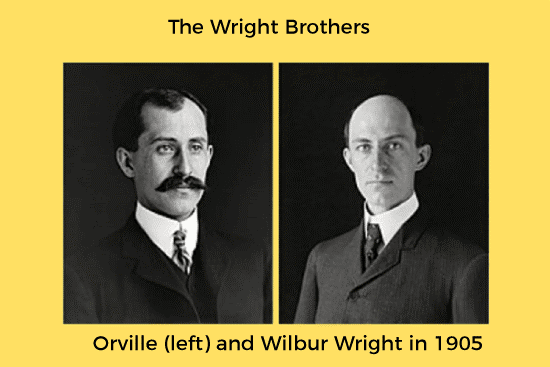 George Cayley first propounded the idea of a modern aeroplane in 1799, and Jean Marie Le Bris made the first powered flight in 1856. After them, Alexander F. Mozhaisky also made some new improvements in 1502. After researching the design of the wing as well as the flight of the bird, Leonardo Da Vinci made a design of man-powered aircraft. A controlled flight glider was experimented by John J Montgomery. Some more inventors also developed the same machine, like Otto Lilienthal, Langley, etc. Hiram Maxim built a craft that was tested in 1894, but due to uncontrollable maxim, abandoned working on it. There are some more, but due to some reason, their inventions were not as successful as the Wright brothers, so the credit went to the Wright brothers.

During their childhood, the Wright brothers' experience with a toy helicopter sparked their interest in flying. The brothers attended high school but did not get a diploma. However, the diploma was awarded posthumously to Wilbur on 16th April 1994, perhaps on his 127th birthday. After high school, the brothers designed and built their own printing press and started printing the newspaper. Due to their interest in bicycles, they started their own business of cycle in 1892. The name of their company was Wright Cycle Company. And later, they established a factory for their own brand and started manufacturing by 1896. Wright brothers became skilled in the mechanism by their long experiences with machines like; cycle, motor, or printing press in their own workshop. They were inspired by their long experiences, especially with cycles, and from here, they got an idea of balancing as well as controlling the flying machine.

While working for the printing press in the 1890s once they came across the news as well as saw the pictures of new machines like gliders that were operated by Otto Lilienthal. The first three important aeronautical events occurred in 1896. The first important and successful event of the flight was done by Samuel Langley, who was the secretary of the Smithsonian Institution. The experiment was done with a steam aircraft. The second was in the middle of the same year, by Octave Chanute, an engineer in Chicago. With the help of many other men, he experimented with several flights of gliders. And the last event was done by Otto Lilienthal. But, unfortunately, he was killed during his flight by a glider.

Moreover, these events, especially Lilienthal's death, inspired the brothers most for their invention. The last event of glider flight, as well as the death of Lilienthal, influenced the brothers as they cited that, after this event, they became serious about their research of flight. Wilbur said about the greatness of Lilienthal as he was undoubtedly the greatest of the precursors, and the world will always be grateful to him for his contribution.

The brother wrote a letter of request in 1899 to the Smithsonian Institution for the information and publication about aeronautics. In the same year, they began their mechanical and aeronautical experimentation that was based on the works of some earlier scientists like; Cayley, Lilienthal, Leonardo Da Vinci, etc. However, they were impressed by the experiments of Lilienthal as before any motor flight first they should master the art of flying with gliding practice. But another death of Pilcher by gliding changed their thought that for a successful flight, the control of the pilots on their machine is an important part. Since they considered Lilienthal's strategy of practicing the glider was right, but they also noticed some faults in balancing & controlling. To find a better way as well as the solution to this fault, they experimented and made their first aircraft: a small biplane glider. They started their work by trying to understand how they should design wings in order to enable flight.

The Wright brothers gave their lots of time in observation of the flight of the bird. They observed that during their flight in the sky, when the air flows over their curved wings, that makes them able to lift and they could fly. Birds used to change their wing’s shape for turning and changing their direction. Finally, with all their experiences and observations with a cycle as well as birds, like how to control the cycle during riding and how birds take their flight and change their direction. The Wright brothers found out the proper way to fly an aircraft. Based on this observation, they discovered the idea of wing-warping (man-made wing). They used this technique of wing-warping for their successful flying with the flying machine.

They used the technique of bird's wing and built their own biplane as well as tested that by flying in 1899. After the successful test of this plane, the Wright brothers tested and built a full-size biplane in 1900. The brothers made their biplane on the basis of some earlier inventor's work in the 1890s. They called this biplane to hang glider 'double-decker', which flew well in 1896 experiments.

They chose a remote location kitty hawk for their glider testing, as this was the favorable place for flying as well as doing practice. They did their first test on 3rd October 1900 at Kitty Hawk. Their tests in Kitty Hawk were successful with their 50-pound glider. They had tested their flights in both manners, unmanned and piloted, and it was the first piloted glider. After the successful test of the first piloted glider flight, the brothers made some more new improvements. They made a bigger glider than before.

Then in 1901, the brothers built the biggest glider of 100 pounds and tested it at Kill Devil Hills, North Carolina. This testing fight with the biggest glider was not successful due to many complications in the flight as well as in the glider. After this failure, they became very disappointed and thought; perhaps the man will not fly in their lifetime.

Despite their disappointment with their unsuccessful attempt, they reexamined their attempted test and decided to make some new improvements in order to make the machine fly properly. For their experiment, they built a tunnel and done several tests on dozens of tiny wings. This test gave him the result, and they came to know the reason for their unsuccessful flight testing. They also accept the accuracy of data published by Lilienthal.  After the tunnel test, they did several flight tests, and they became clear about the importance of wings with large and narrow in size. This discovery of the wing's shape made them able for a further successful test flight. Fred Howard, a biographer, praised the tunnel tests. He said that it was the most important and successful experiment in history as it took little time as well as little material. It also took very less amount.

In 1908 the brother said to the Century Magazine that all the earlier facts about flying were not reliable because all the tests based on that were a failure, so they were wholly dependent on their own developments as well as experiments.

The invention of powered aircrafts

After that, the Wright brothers did so many tests, as they flew numerous test glides using their new glider during 1902. Their experiment found out so many facts as a movable tail could be balanced the plane, etc.  So for a balanced turn, they attached a movable tail to the wings of the craft. When they became successful on their test based on their tunnel experiment, they decided to develop a powered aircraft. 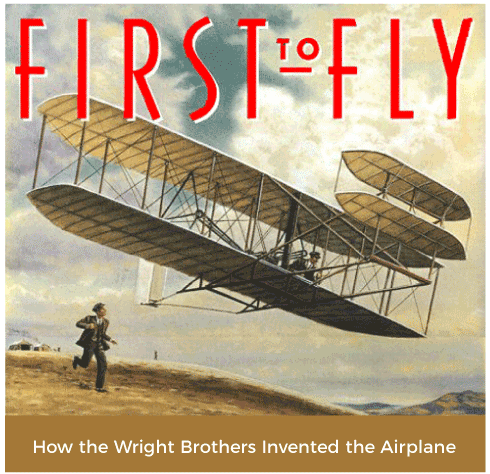 And finally, they experimented and developed a powered Wright flyer in 1903. They attempt their first flight on 14th December 1903 in which caused minor damage to the flyer. So for a successful flight, they needed a slop-like track. They took downward flight from the top of the hill from which they got a speed in flight. So afterward, they used this method for their flight as well as made the track on the hill. It took two attempts to fly the machine in which one flight resulted in a minor crash. After repair on 17th December 1903, the brother makes two flights. The brothers shipped the damaged flyer to home, then to the British Museum, and finally installed it in the Smithsonian Institution in 1948

In 1904 Wrights built the Wright Flyer II after several testing flights and minor damage of the aircraft; they took a longer flight ever than before as they fly 4,080 feet (1,244m), for which they take only one and half minutes time. By the end of the same year, they take two more successful flights. In these flights, they cover more distance, like 3 miles, as well as take more rounds as the total of four rounds. In 1905 the brother built a new airplane, the Wright Flyer III, and made its maiden flight on 23rd June, but after a fatal crash on 14th July, they rebuilt the flyer with some modifications that improved stability and control. With this flyer, Firstly, they made a series of 6 long scenic flights between 26th September and 5th October and finally they took the last flight. It was the longest flight of 24.5 miles (39.4 km) in thirty-eight minutes and three seconds. After these long and successful flights, they became ready to manufacture flying machines for practical use as now they could make it commercial.

The brothers offered to the Government of Britain, France, and Germany to sell a Flying Machine, but they did not accept. The reason behind this rejection was that the Wright brothers never demonstrate their flight publicly in order to escape from news reporters, as well as fears of the competitors stealing their ideas. Moreover, they were criticized much in the different newspapers and magazines. But after their first demonstrated flight in France in 1908, all critics admitted that they were wrong and did an injustice. After these incidents, Orville said: “they gave their whole time as for two years 1906 and 1907 in making the crafts as well as also in doing some business deal for selling them. After this they take a flight publically for demonstration at Kill Devil Hill in 1908”.

Got contracts for flying machine

Afterward, they got several contracts from the government as well as by the armies of different countries like France, the U.S, Britain, Germany, etc. They made numerous developments in aircraft. In 1909 the Wright brothers gave training for flying to defense officers with their purchased plain by the government. And then it was the year 1912 when the brothers made the first fighter plane, loaded with arms like machine guns, etc.

Got patent for flying machine

Further, the Wright brothers wrote their patent application themselves in 1903, but it was rejected. After that, with the help of Henry Toulmin, they got the patient for their flying machine in 1906. Their patent number was 821393. However, there were so many complications and fight on patent, but ultimately they were solved.

Got recognition And at last, FAI, known as Federation Aeronautique International, which is a standard organization in aeronautics used to keep the records of best flight, declared the Wright brothers 1903 flights as "the first sustained and controlled heavier-than airpower flight.”