What is an Agent?

For example, human being perceives their surroundings through their sensory organs known as sensors and take actions using their hands, legs, etc., known as actuators.

Diagrammatic Representation of an Agent 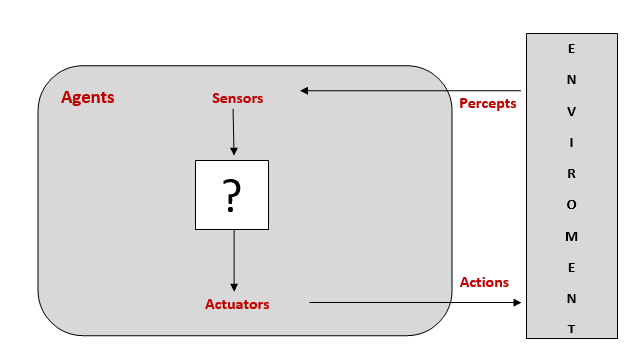 Agents interact with the environment through sensors and actuators

A rational agent is an agent which takes the right action for every perception. By doing so, it maximizes the performance measure, which makes an agent be the most successful.

Note: There is a slight difference between a rational agent and an intelligent agent.

An omniscient agent is an agent which knows the actual outcome of its action in advance. However, such agents are impossible in the real world.

It is a software program which works in a dynamic environment. These agents are also known as Softbots because all body parts of software agents are software only. For example, video games, flight simulator, etc.

Behavior of an Agent

Mathematically, an agent behavior can be described by an:

Rationality of an agent

It is expected from an intelligent agent to act in a way that maximizes its performance measure. Therefore, the rationality of an agent depends on four things:

For example: score in exams depends on the question paper as well as our knowledge.

A task environment is a problem to which a rational agent is designed as a solution. Consequently, in 2003, Russell and Norvig introduced several ways to classify task environments. However, before classifying the environments, we should be aware of the following terms:

Note: Fully Observable task environments are convenient as there is no need to maintain the internal state to keep track of the world.

Note: If the environment is partially observable, it may appear as Stochastic

If the agent’s episodes are divided into atomic episodes and the next episode does not depend on the previous state actions, then the environment is episodic, whereas, if current actions may affect the future decision, such environment is sequential.

If an agent has the finite number of actions and states, then the environment is discrete otherwise continuous.

Example: In Checkers game, there is a finite number of moves – Discrete

A truck can have infinite moves while reaching its destination –           Continuous.

Example: A tennis player knows the rules and outcomes of its actions while a player needs to learn the rules of a new video game.

The goal of artificial intelligence is to design an agent program which implements an agent function i.e., mapping from percepts into actions. A program requires some computer devices with physical sensors and actuators for execution, which is known as architecture.

Therefore, an agent is the combination of the architecture and the program i.e.

Varying in the level of intelligence and complexity of the task, the following four types of agents are there: 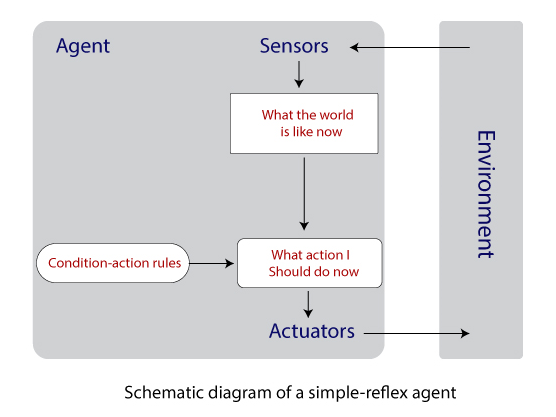 Example: iDraw, a drawing robot which converts the typed characters into

writing without storing the past data.

Note: Simple reflex agents do not maintain the internal state and do not depend on the percept theory. 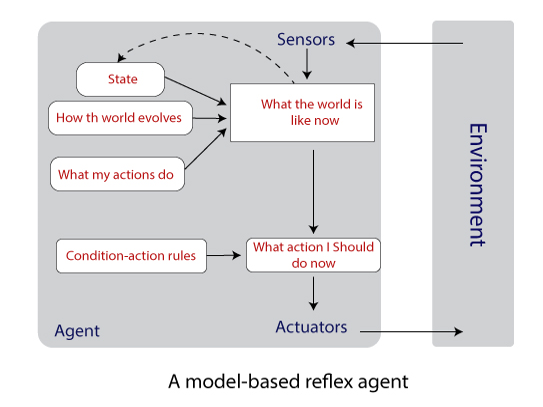 Example: When a person walks in a lane, he maps the pathway in his mind.

Note: With the help of searching and planning (subfields of AI), it becomes easy for the Goal-based agent to reach its destination. 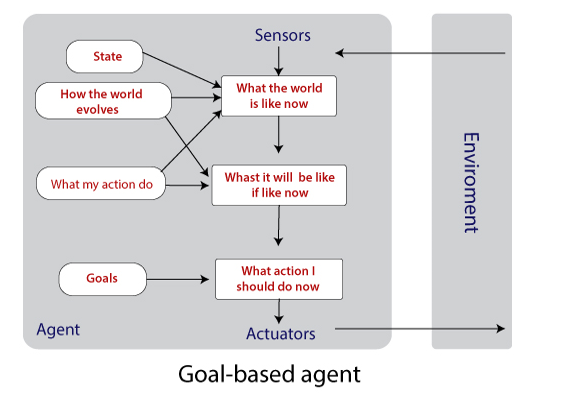 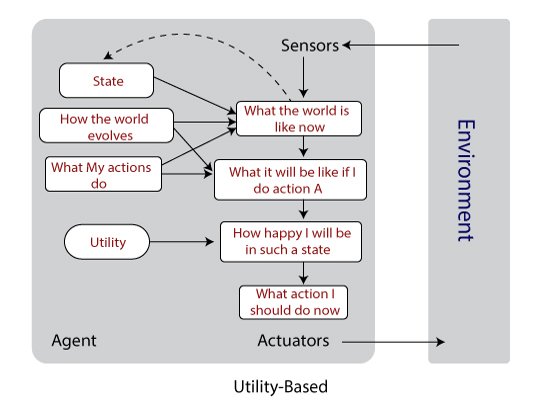 Example: The main goal of chess playing is to ‘check-and-mate’ the king, but the player completes several small goals previously.

Note: Utility-based agents keep track of its environment, and before reaching its main goal, it completes several tiny goals that may come in between the path.

Example: Humans learn to speak only after taking birth.

Note: The objective of a Learning agent is to improve the overall performance of the agent. 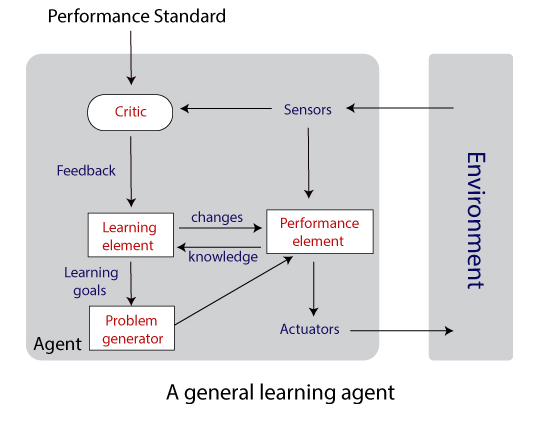 Working of an agent program’s components

The function of agent components is to answer some basic questions like “What is the world like now?”, “what do my actions do?” etc.

We can represent the environment inherited by the agent in various ways by distinguishing on an axis of increasing expressive power and complexity as discussed below: