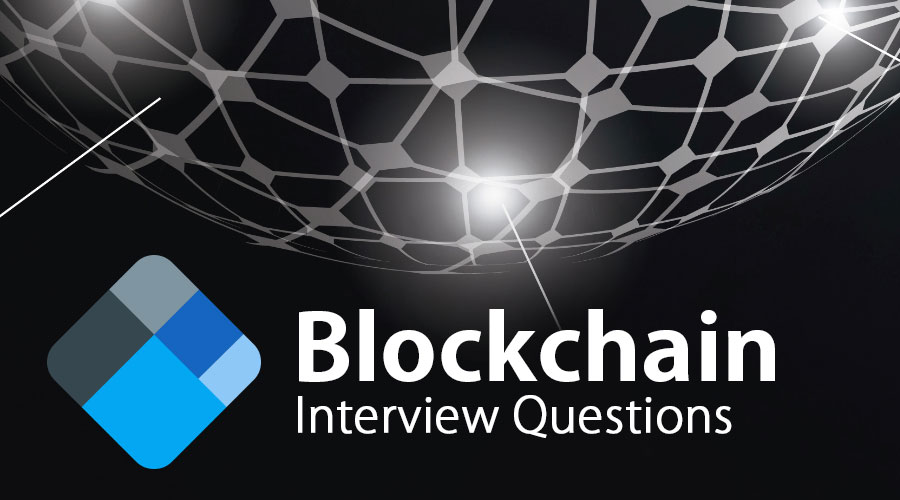 1. What do you understand by Blockchain?

Blockchain is a chain of blocks made up of digital pieces of information or can be defined as the growing list of records linked via cryptography. Each block on the chain contains a cryptographic hash of the previous block, a timestamp, and transaction data. Blockchain is an open, distributed, decentralized, public ledger that can record transactions between two parties efficiently and in a verifiable and permanent way. Blockchain is the backbone of the world famous cryptocurrency– Bitcoin, a peer to peer electronic cash system and a decentralized network that allows users to make transactions directly without an intermediary to manage the exchange of funds. Blockchain is the fastest growing and the most trusted crypto company helping millions across the globe gives a comfortable and safe way to access cryptocurrencies.

2. What are the features of Blockchain?

There are 5 Features of Blockchain are as follow: Increased Capacity: Blockchain increases the capacity of the whole network because there are a lot of computers working together which in total offers a high power than a few of the devices where the things are centralized. Better Security: Blockchain provides secure network by the connection of several computers called nodes which confirm the transaction on the network. There is not even a single chance of shutting down the system making Blockchain a secure system for keeping records. Trustless exchange:  Using blockchain, two parties can make an exchange without the oversight or intermediation of a third party, sharply reducing or even eliminating counterparty risk. Durability, reliability, and longevity: Blockchain does not have a central point of failure due to the decentralized network thus better able to withstand malicious attacks. Transparency and immutability: Blockchain technology makes transactional histories more transparent. It stores all the transactions over a distributed network which are transparent; viewable for public. Also, Blockchain is immutable (can’t be altered) for transactions because of multiple records’ storage in a single block over the peer-to-peer network.

3. What are the different types of Blockchain for transactions?

There are three different types of Blockchain available for transactions:

A block is a file that records some or all of the most recent Bitcoin transactions that have not entered any previous block at yet. It is a container data structure that contains more than 500 transactions on average in the Bitcoin world.

5. What are the Block identifiers?

Block identifier (block header hash and block height) is a cryptographic hash value that represents a unique identifier in Blockchain to identify a Block.

6. What are the main elements of the block?

The main elements of block are as follows:

7. What are the basic components of Blockchain Ecosystem?

Node application is a specific software solution that each inter-connected computer needs to participate in a blockchain activity or to connect with blockchain ecosystem. Example: For Bitcoin ecosystem, each computer uses Bitcoin wallet application to participate in Bitcoin ecosystem and to identify each node on the network. Shared Ledger is a distributed data structure that Blockchain’s node application stores to hold the content of Blockchain ensuring access for every node. Consensus Algorithm is a logical component of Blockckhain Ecosystem that is implemented as part of node application. It provides rules for validation of transactions ensuring data security and permanence of Blockchain. There are three different types of Consensus Algorithm as given below: Example: Bitcoin uses Proof-of-Work (PoW) consensus algorithm. Virtual Machine is a part of node application that provides an environment to run all the instructions. It handles all the activities done in Blockchain.

Cryptocurrency is a tradable digital or virtual asset designed to work as a medium of exchange and built with strong cryptographic protocols for secured transactions. Having strong security, cryptocurrencies are difficult to counterfeit. These are not controlled by any central authority.

9. In a Blockchain, can we remove one or more block from the network?

Sometimes only a specific part of this online ledger is to be considered. Without making a lot of efforts, this can be done easily with the help of default options and filters.

10. What is Encryption? What is its role in Blockchain?

Encryption is a methodology that any organization use for its data security. It keeps the data secure from unauthorized access. The encrypted data is encoded or modified up to some extent before it is sent out of a network by the client and only authorized users can decode the information. In Blockchain, this approach quickly adds more to the overall security and authenticity of blocks and helps to keep them secure.

11. Name the platforms that are actively developing Blockchain applications?

RSA, Blowfish, triple DES, and AES are some of the cryptographic algorithms frequently used in Blockchain.

RSA is a cryptographic asymmetry algorithm that provides a state of data security for applications to use. It offers public-key encryption. RSA stands (for its developers’ name as Rivest-Shamir-Adleman) is one of the first public key cryptosystems which gives encryption key to everyone and keeps its decryption key as private. It is widely used for secure data transmission and hence applicable for several use cases including Blockchain.

14. List the real-world use-cases of Blockchain. Explain any one.

Following are the real world Blockchain use-cases as follows: Suppply Chain Management In the case of Supply Chain Management, there is a lack of transparency between suppliers as an issue that firms deal. Blockchain resolves this issue with the help of its distributed ledgers. Multiple peoples can access the same database for increasing transparency in the supply chains. Blockchain consists of immutable ledgers and a timestamp for appending all the valid transactions which can be used in auditing, stop theft, and counterfeits. This Blockchain use case can improve regulatory compliance, reduce paperwork, and also help cut cost significantly. Food Trust is the new one blockchain based product of IBM that helps in implementing this use case.

15. What are the steps involved in Blockchain Project implementation?

These are all steps for Blockchain Project Implementation as follows:

Security Policy means what are the things for a system need to be secured from threats and how to handle the situations if threats will occur to that system. There are some protocols within which a network user binds. He must be agreed and follow them to enhance overall security. In case of a complex system like information systems or financial records, these policies are decomposed into sub-policies to facilitate the security mechanism.

17. In what way verifiers check that if a block is valid?

Every full node on the network verifies the block. Whenever a new block is announced, every node that receives it creates a list of checks among which the two most important checks are of:

18. What are the drawbacks of Blockchain?

These are the following drawbacks of blockchain as follows: