Difference between Immigration and Emigration

Immigration is the procedure by which people become permanent residents or naturalized citizens of different countries in which they don't hold citizenship. In simple language, immigration means settling in a country where the person is not born. A person who comes to live permanently in another country is known as an immigrant. The word immigrate came from the Latin word in the 17th century, "immigrare," which means "to go into.” There are many factors that can provoke people to settle in another country, like the chance of getting a better job or high pay, better living conditions, educational opportunities, political, social, economic, or religious reasons.

For instance –a Pakistani person who decide to settle in India for higher pay in a job is an immigrant to India.

Emigration has both favorable and unfavorable effects on the country, like, when a person leaves a country, it pulls down purchaser contributions and labor strength. If a country is overfilled with the labor force, then it will relieve unemployment and will have a favorable effect on the country. If the circumstance is different, emigration can bereave the country of its talented labor force. Nevertheless, talented labor can emigrate to another country for better job opportunities, better welfare programs, better education, a favorable climate, and many more factors.

For instance- a person leaving Pakistan to reside in India for higher pay is an emigrant to Pakistan.

Comparison between immigration and emigration 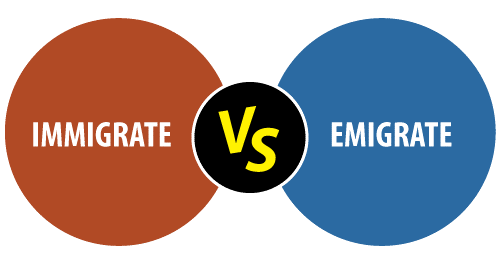