Difference between Phrase and Clause

A clause is a group of words that contains the subject and verb in a sentence.

The girl is eating.

In the above instance, girl is the subject, and eating is the verb; therefore, the complete sentence is a clause because it contains both subject and verb.

The clause can make a complete sentence that doesn't need any helping words.

The above instance has two uncomplicated words that make a complete sentence and can be understood. It contains subject and verb, and therefore it is a clause.

A sentence can also contain more than one clause and is joined with a conjunction, which is called compound sentences.

In the above sentence, there are two clauses- I like coffee, and she likes tea.

A phrase is any group of two or more words that convey a concept and acting as a single unit within a sentence. The phrase is without a subject-verb unit because it does not convey any meaning, but it clarifies the context of the sentence when joined with a clause.

On a table, on the wall, under the bed.

The above instances are of distinct sentences which do not contain subject and verb; therefore, they are categorized as phrases.

A sentence can also contain both phrases and clauses.

She is studying under the tree.

Comparison between Phrase and Clause 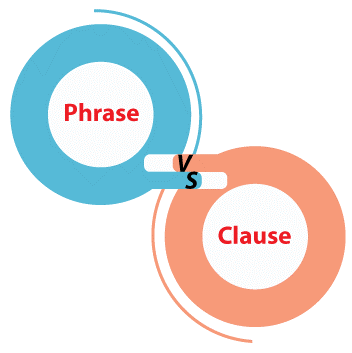