Difference between Dicot and Monocot seeds

Dicot seeds are the seeds that comprise two embryonic leaves or cotyledons. They are also called dicotyledons. It includes one embryo with an embryo axis and two cotyledons all over it. There are about 20000 seeds of cotyledons. Every angiosperm or flowering plant is categorized in dicots that grow from the ground when the seed germinates. Many dicot seeds are made up of exactly similar parts facing each other and can be split into two equal halves. The shape and size of dicot seeds differ and can be categorized between different species. The endosperm is generally less in dicot and, in certain cases, may not be available. 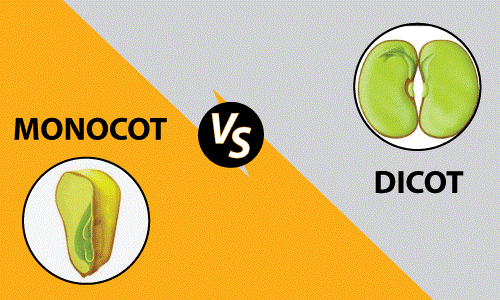 Monocot seeds are the seeds that comprise one (mono) embryonic leaf or cotyledon. It is also called monocotyledon. There are about 60000 species. The size and shape of the monocot seeds are big because of the existence of a huge endosperm. An endosperm stores a lot of food to help the embryo. Monocot seed is also known as albuminous seeds because of the existence of endosperm. The embryo is the significant part of the seed, which is preserved on the surface by a layer and provided with foods and nutrients by the endosperm.

Comparison between Monocot and Dicot seeds