There is an era for each and every anime that is connected with it. The category has been thriving since the 1970s and continues still manages to capture spectators and fans for many years with new anime. Although the latest anime still has a fantastic goal when it comes to making people want more, and anime made years before or decades before is still valid to date.

In this list, we have brought to you the fantastic top 10 anime since the beginning of the industry. In the last two decades, many of these shows have been created, so if you are the one on a Sunday morning which looks at some of them, you will receive some reminiscence. 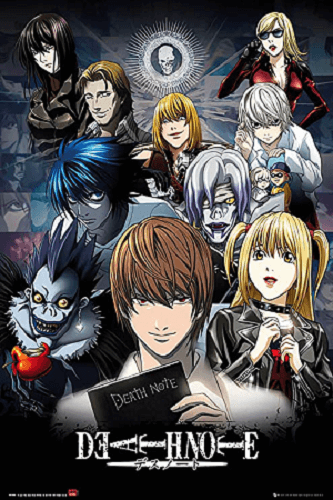 The series is a thriller/action-based story that centers on Light's subsequent attempts to use the Death Note to carry out a worldwide massacre of individuals whom he deems morally unworthy of life in order to change the world into a utopian society without crime, using the alias of a god-like vigilante named "Kira," and the subsequent efforts of an elite task-force of law enforcement officers. That was headed by L, who was a renowned detective in the past.

Death Note comprises of only 37 episodes but still takes the top anime place due to its tough action, incredibly quick plotline, and anime that does not grow into other flips to keep faithful to its original premise, leaving it be one of its kind anime on our list. Death Note is the perfect series to for the weekend.

Death Note is always the first anime recommendation for a newcomer to the anime community, particularly in India.

It has a terrific tale, and the mental game between Light and L is impressive. The light Yagami is a youngster who received a notepad. As he writes someone’s name, they die. He then begins mass killings of lawbreakers, which drew the attention of L, and the game of chess commences. 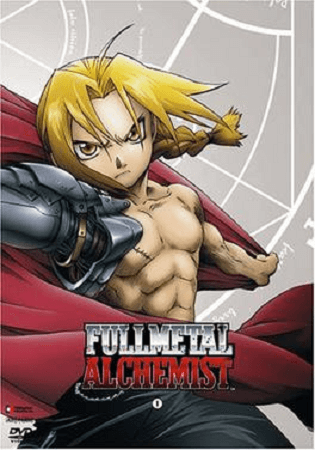 The plot focuses on a manga series. The former, nevertheless, came to a close without the manga series, much like Game of Thrones, having completed. Fullmetal Alchemist: Brotherhood forms its basis on the completed manga.

Brotherhood, with 64 episodes, is centered in a universe where the dominating science is Alchemy, and the act of converting an item into another item or thing through symbols is called Transmutation Circles.

Two brothers are gravely injured after trying to resuscitate their dead mother using alchemy since it ends tragically wrong. Edward, the oldest brother, ends up losing the arm, while Alphonse, his younger brother, ends up losing his full body and enters the metal armour avatar to help him escape death. Resurrecting somebody from death is a huge big taboo in the alchemical realm, with severe consequences.

This, however, is only the beginning of a wild pair adventure. They are being driven out from their home country into a realm that is far wider than they are, needing to conquer the problems and also avoiding a bad group discovering the stone of the philosopher.

There are lots of light periods, so the tale is not too annoying, and it is growing exponentially and does not hurry in any manner. 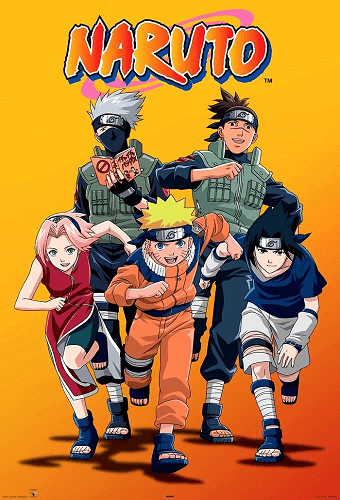 Naruto, Ninja's biggest anime, with almost 220 episodes, is one of the favourite of many. This anime was originally launched as Masashi Kishimoto's Weekly Shonen Jump manga in 1999. Two titles of this anime are Naruto and Naruto: Shippuden.

The backdrop of Naruto is Shinobi's (Ninja) fictitious world, and inept youngster Naruto grows there and, in the process, tries to help their numerous friends and masters. Naruto and other avatars of Ninja fight with different chakra energy methods of Ninja. Nuroto's ambition is to obtain his friends' praise and appreciation and become the community Hokage, the most accomplished ninja who leads the village.

This anime reflects a number of fundamental things, such as strong relationships with friends and family, disloyalty, and separations. Naruto can be anyone's favourite who loves to watch long shows or series. 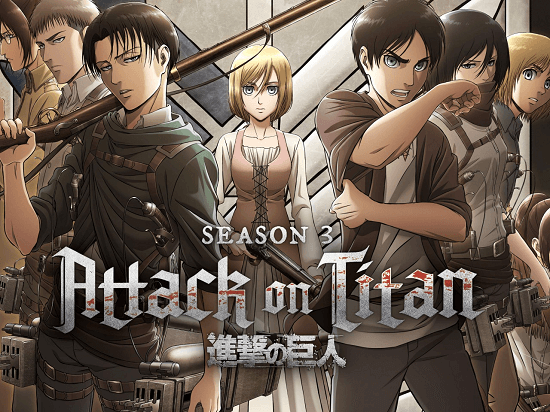 The story opens on Paradis Island, where the residents have constructed massive barriers to shield or guard themselves against assaults by bloodthirsty titans.

Things swiftly deteriorate when two titans breach the boundaries, igniting a conflict that goes on for 13 years from the beginning of the series. Eren Yeager and Mikasa Ackerman unite the Survey Corps in their quest for vengeance against the titans that destroyed their house and ate Eren's mother.

Eren and his pals establish the Scout Regiment, an elite organisation of troops that combat the Titans, in order to exact vengeance on their enormous opponents and recover the Earth from the Titans.

So, if action and adventure are your things, prepare on a journey to take down these Titans. 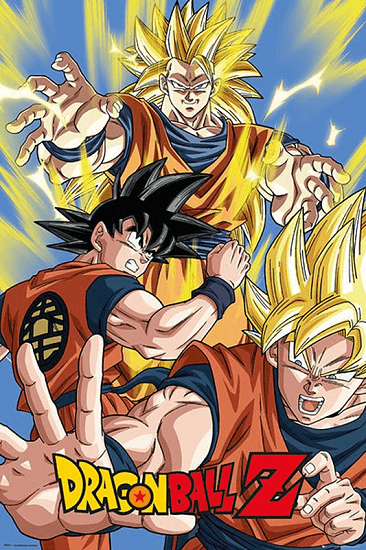 Dragon Ball Z or DBZ is certainly one of the biggest and famous anime series. It follows from the classic Dragon Ball series and incorporates the next episodes in Akira Toriyama's manga series.

The journey begins with Gukuu, who, after winning the Martial Arts Tournament, lives quietly alongside his son and wife. All of this changes because of the advent of Raditz, who alleges he is a long-lost Gokuu brother.

He says to Goku; he's a fighter for another planet which is now a vanished or extinct race. He further says that Gokuu was sent as a child to earth to dominate and wreck the planet, but after suffering brain injuries, he lost memory and grew up in a good boy battling to support the vulnerable.

Gokuu and his comrades endured many assaults from alien opponents following this revelation. Dragon Ball Z proceeds with the experiences of Goku, who defends the Earth, together with his precursor allies, against foreigners such as Frieza, androids such as Cell, and magical beings such as Majin Buu.

It's all at once a fascinating, interesting, and tragic tale to watch and enjoy.

Since the Dragon Ball new series, the cast members have grown and developed that is fascinating to watch if you are a series fan. 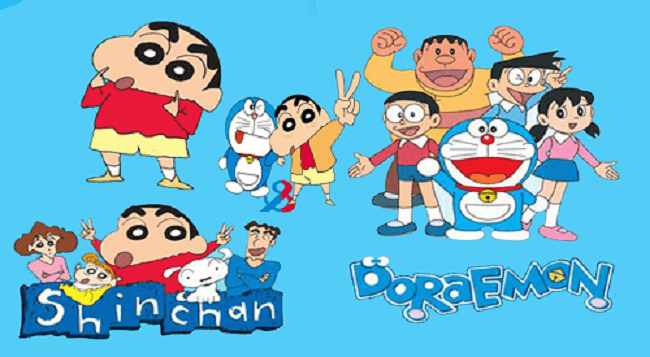 This is a tie, as both Shinchan and Doremon in India are so prominent. During your babyhood, you probably would have seen one of them on Television. Shinchan is a wicked boy who makes trouble around him. The episodes and shows focus on his and his family's narrative, their regular routine.

Whereas Doremon is a cute future robot, who helps a stupid youngster named Nobita. He provides him with fancy, electronic gizmos, and Nobita gets in trouble every time.

Shinchan's mischievous and doesn't have any idea what to do, Whereas Doraemon uses his mind, and he is cute but not as active and nasty as Shinchan.

Both series are independently fun to watch and entertaining, captivating for the viewers.

Following a close encounter with a tea-house teenager, Fuu rescues two expert swordsmen, Mugen and Jin, caught by the Japanese police mistakenly following their fighting, resulting in the murder of the area's judge's son. At the moment, Fuu was harassed by his son; hence she saved the duo since they helped her. She instructs the men to follow her through Japan in search of the Samurai, who scented of the sunflowers; this is where the adventurous journey begins.

The series then continues in Edo-era Japan. What is nice about the show is that Champloo Samurai tries to be precise with the time, era lifestyles, but also in the occurrences, which influence the characters.

It's a humorous and sometimes over-the-top anime series. But the visuals and comedy style make it very easy for anime viewers. 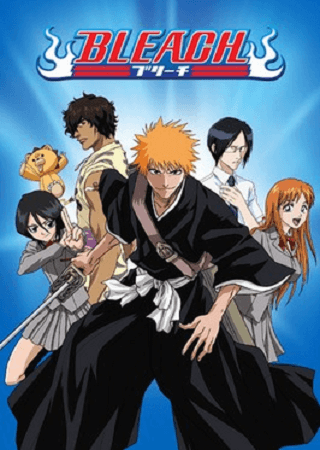 This is one of the longest anime tv show with an astonishing 366 episodes. It gathered devoted fans over the years. The plot centers around Kurosaki Ichigo, a high school pupil who can watch or see the ghosts. After an accident, he acquires this special power. During the event, when a soul reaper named RukiaKuchiki attacks him and her family, he and her family race to help Ichigo and his relatives and get hurt as they guard them.

Ichigo swears to take Rukia to save his parents, and the little kid, therefore, starts to become a reaper of the soul (Shinigami).

The storyline is akin to Sixth Sense; therefore, you'll likely also appreciate Bleach if you've loved that film. Ichigo then pursues to find all the hollows that are attacking the civilians. He is joined by YasutoraSado, Orihime Inoue, and Uryuu Ishida, his classmates, with their special skills.

The Bleach TV series represents an adjustment of the same name Tite Kubo manga series. Noriyuki Abe is the creator of it. This is a beautiful series of anime adventures that keeps you eager to follow the show. 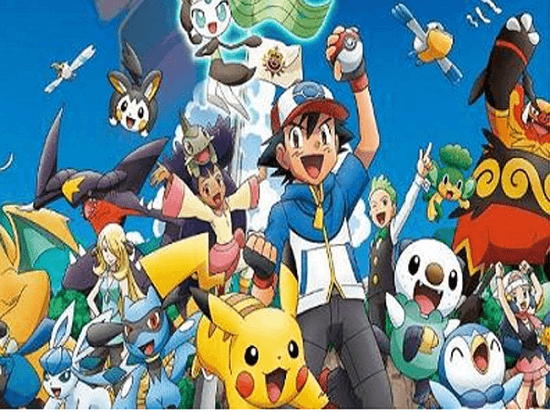 This anime is one of the most emblematic anime series in India, with great influence and success. The young child Satoshi goes around the world to become Pokemon Master with numerous Pokemons such as Pikachu. His Pokemon Go app was the most popular and the most anticipated smartphone game. It is aimed at youngsters. This is a tale of another world that lived with humans like animals called Pokémon. People catch them and have tournaments or content with each other. 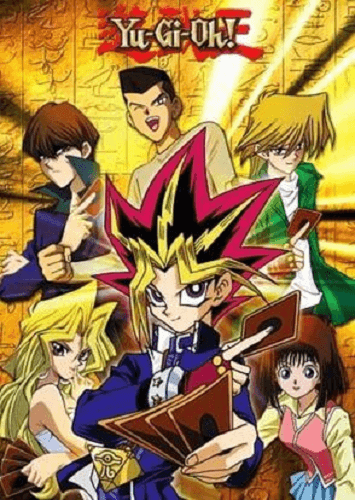 The narrative was published in 1998 and followed the story of YugiMotou, a kid who unlocks the historical Puzzle of the millennium. Yugi wakes the pharaoh in his body, which is a betting alter-ego that resolves his struggle with different games. When Yugi reconstructs the jigsaw, he is overtaken by the ghost of a 3,000-year-old pharaoh. Yugi and his buddies Joey, Tea, and Hondo guard the puzzle, which contains great secrets that many people want. It's both a series of fans of the original version of the Japanese and a dubbed English version.

The English language dub is more famous. It is an exciting and thrilling series to watch.