Top 10 Army in the World 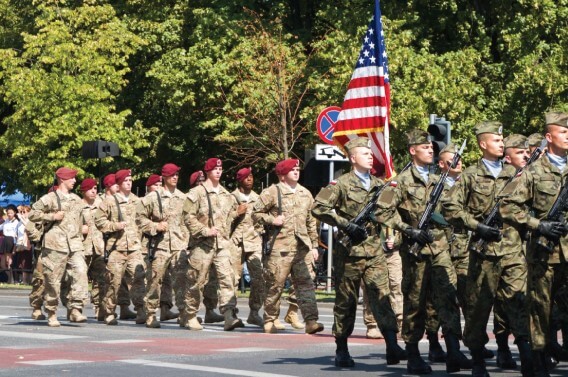 The Commander-in-Chief of the Armed Forces is the President of the US. It also works with the military's two main components, the Departments of Defense (DoD) and Homeland Security (DHS) which are federal executive departments.

Furthermore, military policy is implemented in the country. The USA has eight uniformed services, including the six-armed forces. The world's most powerful and well-equipped army. The United States also boasts the greatest number of airplanes of any country. The country has cutting-edge technology, such as the Navy's most recent rail gun can be operated by a well-trained officer only. The present military capabilities and weaponry available to the United States are: 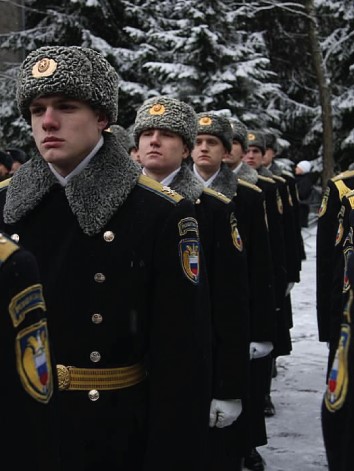 The Russian Armed Forces are also among the most powerful in the world. The military had approximately one million active-duty personnel as of 2021.

There are also over 2.5 million reservoirs, with a total reservoir population of up to 20 million. All male nationals between the ages of 18 and 30 are obligated to serve in the Armed Forces for a year. Russia's Armed Forces are the world's second most powerful military force. Take a look at Russia's present military capabilities and firepower: 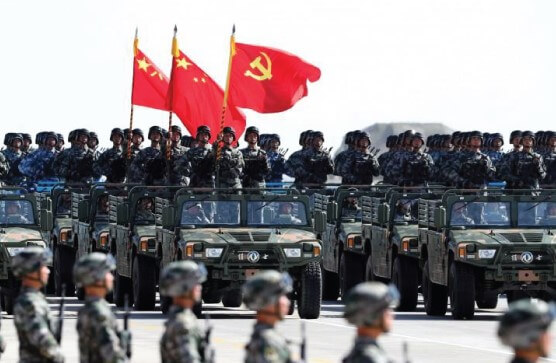 The People's Liberation Army (PLA) is China's regular armed forces and the military wing of the Chinese Communist Party, which controlls the country.

The PLA consists of five major service branches, in addition to the Central Military Commission and other minor organizations: the Ground Force, Navy, Air Force, Rocket Force, and Strategic Support Force. The majority of the country's military troops are assigned to one of five theatre commands based on their geographic location.

It has been hailed as a prospective military giant with considerable regional defense and developing global power launch capabilities, and it is one of the world's fastest modernizing militants. The Chinese army has developed significantly in terms of both size and capabilities. It has also made significant progress in terms of military modernization. Ballistic missiles and fifth-generation aircraft are among the developed military technologies that could change the game. Take a look at China's present military capabilities and weaponry: 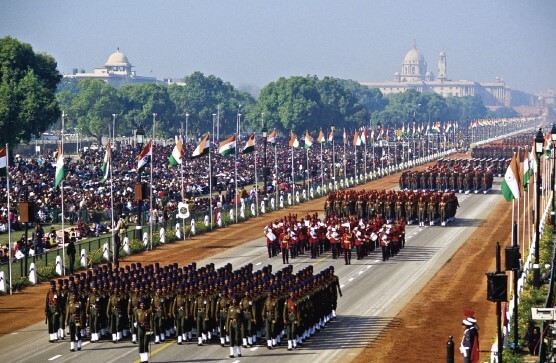 The Indian Government's Ministry of Defense is under the command of the Indian Armed Forces. It is the world's second-largest armed force in 2021, with around 1.4 million active soldiers and its largest volunteer army. According to the 2020 Global Firepower report, it is the world's fourth most powerful army. India also has one of the largest militaries in the world. The present military capabilities and available weaponry for India are listed below: 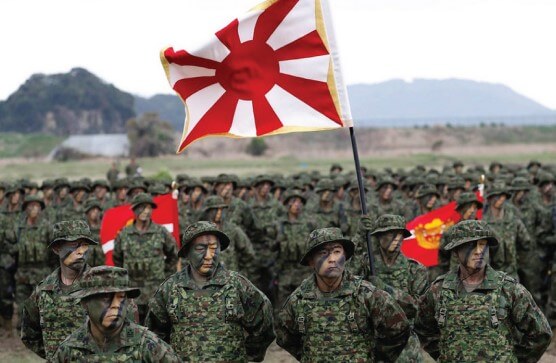 Despite having formally renounced its authority to wage war, Japan retains a modern military with the tenth-largest military budget in the world. Its military might be put to use in self-defense and peacekeeping missions. Japan's deployment in Iraq was the country's first deployment since World War II. In reaction to rising disagreements with China, Japan upped its defense spending for the first time in 11 years. It has also begun its first military expansion in over 40 years, establishing a new military facility on the outer islands. Japan spends a lot on defense and is the world's sixth most expensive spender. The military of Japan is fairly well-equipped. It has a high number of active and reserve personnel at the moment. It is also the world's fifth-largest air force, with a vast number of planes and ships. Among the most powerful armies, it is ranked at 5th. Japan has the fourth largest attack helicopter fleet behind China, Russia, and the United States. Here, Japan's existing military capabilities, as well as its available weaponry is given below: 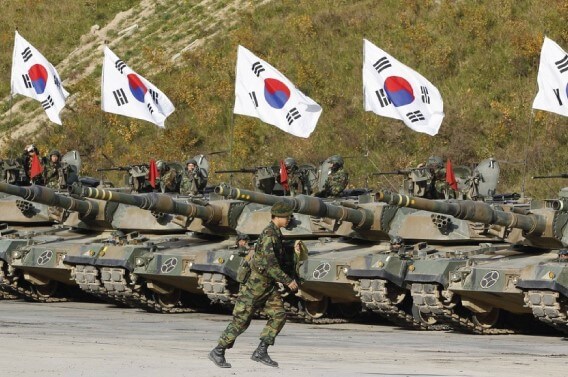 South Korea has the tenth highest budget in the world. Furthermore, the ROK Armed Forces were classified as the world's sixth most powerful force in 2020 and 2021.

The present military capabilities and available weaponry for South Korea are listed below: 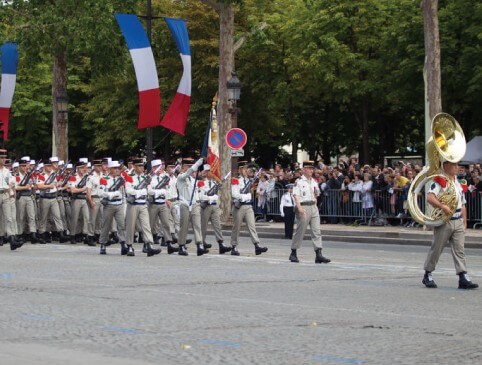 The French Army, commonly known as the Ground Army, is the French Armed Forces' principal land-based component. Its formal designation distinguishes it from the French Air and Space Force. Along with the other four components of the Armed Forces, it reports to the French government. The army is split up into different arms. The Infantry, the Armoured Cavalry Arm, the Artillery, the Engineering Arm, Materiel, Logistics, and Signals are among them. Several weapons will be represented within the parachutist units of a specialist brigade such as the 11th Parachute Brigade. They are the units of choice for deployments abroad and they recruit accordingly. Marine Infantry (including parachute regiments like the 1er RPIMa and a tank unit called the RICM) and Marine Artillery make up the force. The army is ranked as the world's 7th most powerful. The country of France's present military capabilities and weaponry are as follows: 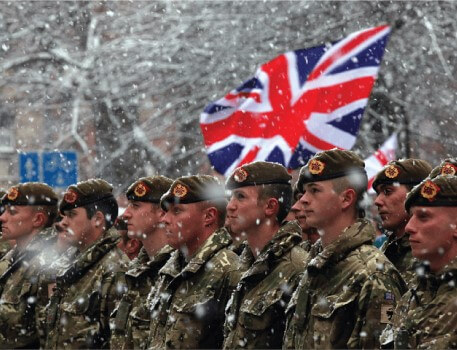 Queen Elizabeth II is the Commander-in-Chief of the Armed Forces of the United Kingdom. Long-standing constitutional convention, on the other hand, vests executive authority in the prime minister and the secretary of state for defense via royal prerogative powers, with the prime minister making critical decisions on armed forces employment. As of April 1, 2021, there were 153,290 UK Regulars and Gurkhas, 37,420 Volunteer Reserves, and 8,170 "Other Personnel" in the British Armed Forces. The overall number of "UK Service Personnel" now stands at 198,880. 77.1 percent of UK Service Personnel are UK Regulars and Gurkhas, 18.8% are Volunteer Reserves, and 4.1 percent are other personnel. The United Kingdom spends the fourth or fifth most on defense in the world, according to the International Institute for Strategic Studies and the Stockholm International Peace Research Institute.

The British army was placed eighth among the world's most powerful militaries. The United Kingdom's current military capability and available weaponry are as follows: 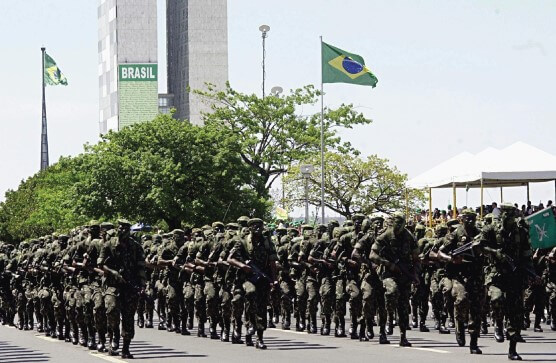 Brazil's armed forces are the second largest in the Americas, second only to the United States, and the largest in Latin America and the Southern Hemisphere in terms of military equipment, with 334,500 active-duty troops and officers. From 2004 to 2017, Brazilian soldiers supervised the UN Stabilization Mission in Haiti. Brazil's current military capabilities, as well as its available weaponry is given below: 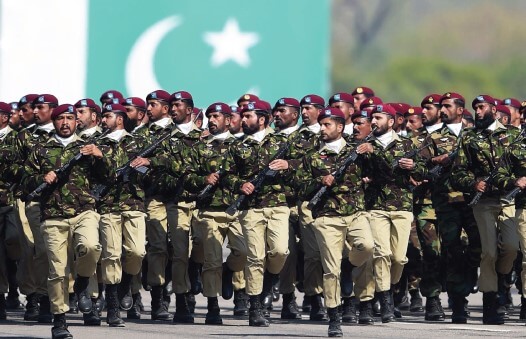 Pakistan's Armed Forces are the country's combined armed forces. It has three nominally uniformed services; the Army, Navy, and Air Force. It ranks seventh in the active military workforce among the world's top 10 armies, backed by a number of constitutionally sanctioned paramilitary groups.

The Strategic Planning Division Force is an essential military component. It is in charge of Pakistan's strategic and tactical nuclear weapons stores and assets, as well as their maintenance and security.

All branches are painstakingly coordinated under the Joint Branch Headquarters during joint operations and missions. In addition, the Pakistan Armed Forces' chain of command is arranged under the Chairman of the Joint Chiefs of Staff Committee, which includes the Army, Navy, and Air Force Chiefs. The present military capabilities and available firepower for Pakistan are listed below: