function pointer as argument in C

Pointers are considered difficult to understand for beginners but pointers can be made to work if you fiddle with them long enough. So, let’s understand this step by step.

An argument is the value that is passed to the function by the user who calls the function. There are two ways in which arguments are generally passed to functions and they are passed in one of the following ways:

In the first method (a), the value of every actual argument within the calling function is copied into the resemblant formal argument of the function which is called.

In this article, we are more concerned about the second way, i.e., Sending the addresses of the arguments.

Function Pointer as argument in C

Here, an individual must recognize that if any modification is introduced by the function using pointers, then it’ll also mirror the modifications at the address of the passed variable. What this suggests is that any changes made are recognized in both the functions and therefore the calling routine. 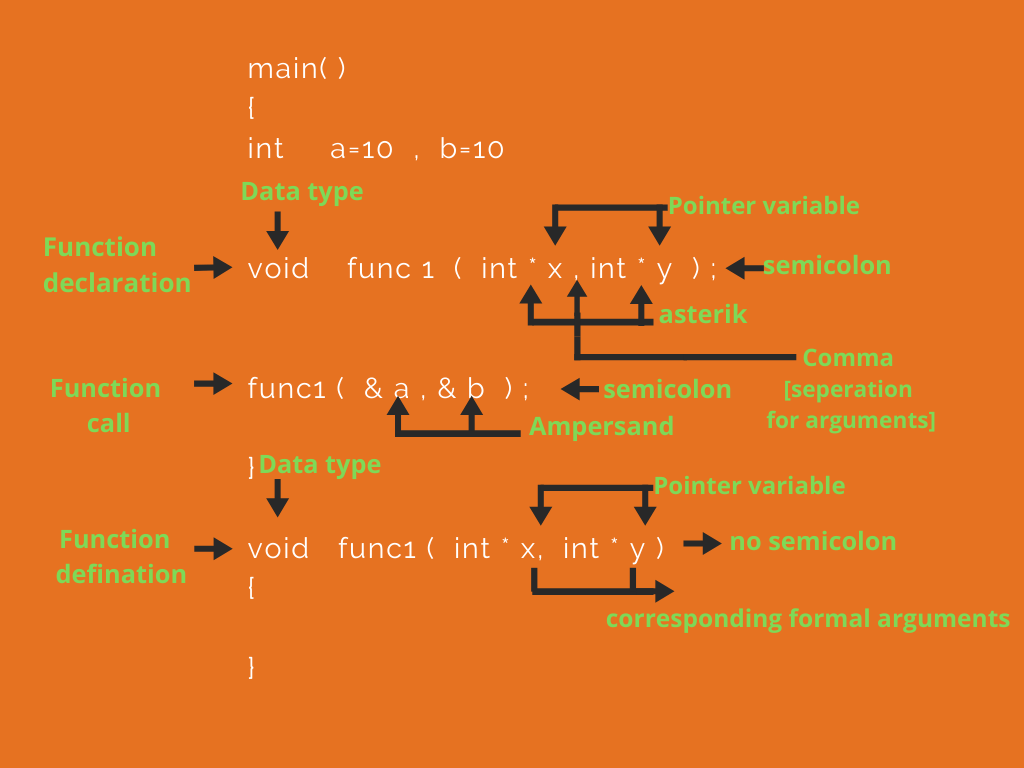 func1() is a function in which arguments passed are addresses of a and b and no value is returned by this function therefore void data type is mentioned before the function.

In function definition, we have formal arguments as pointer variables that are local to the block in which they are defined.

In C, a function pointer is often created or declared as follows:

Here,  type       = variable type which is returned by the function

In the call by reference method, what actually happens is that the addresses of actual arguments within the calling function are copied into formal arguments of the called function.

What can we mean by this technical jargon?

This statement simply states that using the formal arguments within the called function is that we are able to make changes within the actual arguments of the calling function.

In the above code,

→ The address of two numbers is passed to a function swap() whose arguments are pointer type variables.

→ When values are passed, the values assigned to pointer (*p and *q) are changed. It means new values will be assigned to them.

→ This change in addresses is passed to the main() function where they are printed.

*Note: A function pointer can even point to a different function, or in other words that it can hold the address of another function.