The C processor is a macro processor which is used to compile the source code of the program (step by step) . It is not a part of the compiler. All pre-processor commands begin with the hash symbol (#).

The C pre-processor provides various facilities that are:

C language, there are various stages of the execution process. The given following diagram will help you: 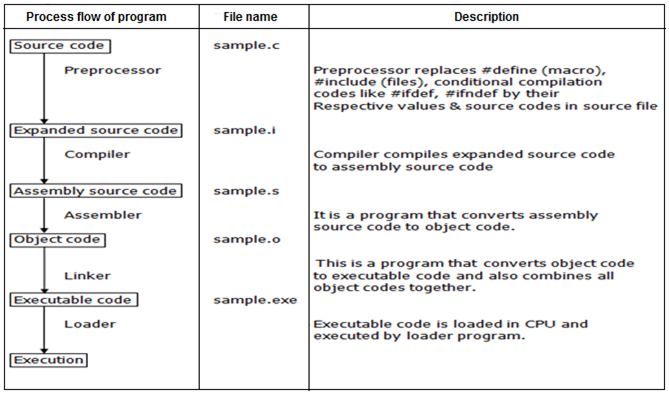 There are following important pre-processor directories in C language.

A macro is a name which stands for a fragment of code. Before using macro we must define it with ‘#define’ directive. It is the name of a macro.

There are two types of macros.

The object-like macro is an identifier that is replaced by value. It is widely used to represent numeric constants.

Function like macros is used as a function call. Let us consider an example.

Here MAX is the macro name.

There are some predefined macros :

C #define and #include.

It defines constant value. It can be any of the basic data types.

It is used to paste the code of given file into the current file. We can use system-defined and used-defined header files.

There are two types of #include directive.

It is used to check undefined the constant or macro. It is defined by #define.

#ifdef, #else and #endif

The ‘#ifdef’ directive is used to check whether the macro is defined or not. If it is defined then, ‘if’ clause statements are included in the source code.

Otherwise “else” clause statements are included in the source file for compilation and execution.

The C #Pragma is used to call a function before and after the main function. It also provides additional information to the compiler.

There are several types of pragmas in GCC compiler.