Trap vs Interrupt in Operating System

What is Trap in Operating System?

A trap is a synchronous interrupt used to perform functionality when an error occurs in a user process. A trap in an operating system can be triggered by unusual events such as illegal memory access, division by zero, or a breakpoint. A trap switches the operating system's mode to a kernel process. The OS then performs various operations before returning control to the already running process. During a trap, the execution of a process takes precedence over the user code. The trap handler is also synchronous. When the OS detects a trap, the user process is stopped. As soon as the system call completes, the OS restarts and continues to execute user procedures: 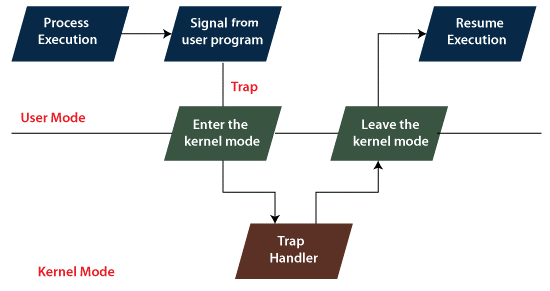 A trap can also be thought of as a CPU interrupt handler. The operating system saves stack pointers, registers memory, and resumes prior execution. Let's take a look at an example. Consider a user who is executing an application on an operating system. The program has a print statement:

This statement is executed by the operating system, which starts the printing process. In addition, the print function in the monitor displays the string returned by the code. Consequently, it is an example of a mesh. The print statement is given first priority by the OS. When the operating system receives this statement, it enters kernel mode. The mode is switched back to user mode after the OS completes its execution.

Trap Mechanism in the Operating System

What is Interrupt in Operating system?

An interrupt is a hardware or software signal that requires the immediate attention of the operating system. This informs the processor that a critical process must be completed immediately. In this scenario the current job process is interrupted. Interrupts are used in all modern computers. In a single application, the OS initiates a sequence of instructions. Further, the execution of the instruction continues until it is completed or an interrupt signal is received. Interruptions in I/O devices are also handled through a special bus control line known as the Interrupt Service Routine (ISR). The INT pin connects hardware devices to the CPU, such as keyboards and network interface cards. When we press any key on the keyboard, interference occurs. When we press any key on the keyboard, interference occurs. The operating system then switches the context and calls the keyboard interrupt handler code. It returns to the previous process after completing the execution: 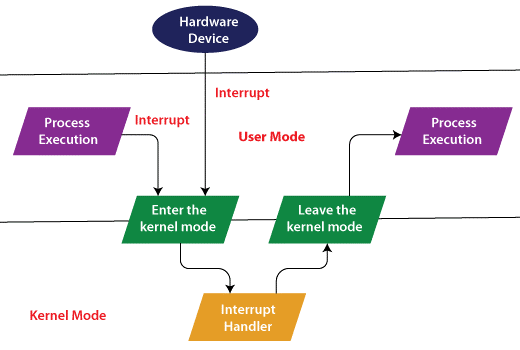 Main Differences between Trap and Interrupt