Like a human brain is the center of all human activities and functions. Similarly, CPU is the brain of the computer which implements all the programs, control the flow of operations and displays the output with the help of input-output (I/O) devices. Before moving further, let’s quickly discover the full form of CPU.

The full form of the abbreviation CPU is Central Processing Unit.

This tutorial will briefly cover the meaning, history, types, parts of CPU, operations of CPU and other detailed information related CPU or Central processing unit.

What is meant by CPU?

CPU is defined as the brain of a computer system. Every computer has a separate CPU socket segment where the Central processing unit or CPU is installed inside the motherboard to execute systems I/O operations. It performs all the necessary logical and arithmetic activities and directs the computer's commands and functions. The term CPU is typically used to indicate a processor that contains the ALU and CU i.e.,

The first electronic computers were invented generations back with a fixed purpose. Therefore, there was a set of electronic circuits that allowed the user to do one particular thing. But modern computers are very different and can serve various purposes at one time. This all happened because of CPU evolution. The brief history of CPU is as follows:

Typically, there are three types of Central Processing Unit: 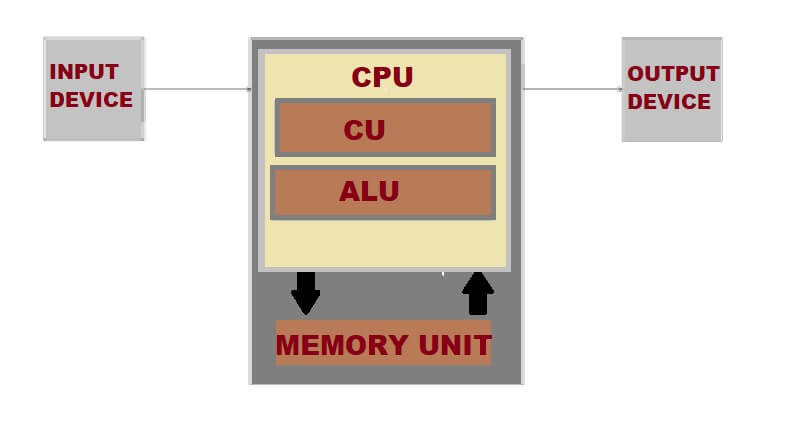 ALU is the vital unit of the CPU. It performs and manages numerical and logical calculations, like difference, sum, division, multiplication, etc. Arithmetical Logical Unit (ALU) contains two subsections that are given below:

CU is the chief component of the CPU. It assigns the task to the computer, and it synchronizes all the system activities that happen. The various functions of the control unit (CU) are as following:

Control Unit is responsible for managing the communication between Input/ Output (I/O) devices and looks after the transfer of information or results from storage.

A register is a special kind of tool for storing memory. The memory stores the already processed data or the data in a queue, waiting for the processor to process it.

This unit stores instructions, information, and outputs. It provides data to other computer units when required. The memory unit has several different names, such as main memory or the internal storage or primary memory, or RAM (Random Access Memory). The size of the memory Unit influences the speed, power, and capability of the computer system. It is further divided into primary memory and secondary memory. The various functions of the memory unit are as following:

CPU is the fundamental building block of a computer. We have computers that run programs that are store in memory. Computers have two components. 1. CPU and 2. Memory

So what do these instructions tell the CPU to do?

The CPU has a state, and that state is measured in two different ways. One is by a set of registers, and other is by some status flags. The registers contain a slot where you can put bits of information and manipulate those bits of information. There's a part of the CPU state, where its program counter is, wherein memory is fetching the next instruction. So every time you execute the instruction, the program counter is incremented. It goes forward to the next location in memory. Like this, the entire process repeats, following the fetch, decoding, and executing steps in their operation, known as the instruction cycle.