In this article, we are going to discuss the Heap Sort, Merge sort and the difference between them.

What is Heap Sort?

Heap Sort - A heap sort is also based on the comparison and selection method. It considers the given array as a heap, converts it into max-heap or min-heap, and then sorts the array by selecting and eliminating.

The pseudo-code of the functions involved in the heap sort is given below:

The heap sort involves three functions, the Max_heapify function places the value at the ith index at its correct position in a heap, and the Build_max_heap function converts the given array into a max-heap. The Heap_sort function calls the necessary function until the array gets sorted.

Click on the given link for the implementation of the heap sort https://www.tutorialandexample.com/heap-sort

Let us sort an array using the Heap sort to get its whole idea and steps involved.

Pass 1 – Swap (36 and 9). After swapping, the largest value reaches the last index at its correct position. Now, call the max-heapify at index = 0 to convert it into a max-heap with the number of elements = 6.

Pass 3 - Swap (18 and 5). After swapping, 18 reaches its correct position at index = 4. We again call the max-heapify at index = 0 to convert the remaining array into a max-heap with the number of elements = 4.

We continue the same procedure for the other passes.

After complete execution of the heap sort function, we get a sorted array as the output.

Let’s move to the next sorting technique Merge Sort

What is Merge Sort?

Merge Sort – The merge sort is a divide and conquer technique that divides a bigger problem into two sub-problems, and each sub-problem is further addressed separately. The out of the program is formed by combining all the results of each sub-problems.

The Pseudo-code of the Merger sort function is given below:

The Merge sort function divides the problems into two subproblems of size L to M and M+1 to U, and the Merge function merges the two subproblems into one. In the Merge function, we store infinity at the last index of the newly created arrays A1 and A2. The idea is if somehow one array becomes empty, the elements of the other array are compared with the infinity and placed in array A.

An array passed to the merge sort function is divided from the index 0 to n/2 and (n/2 + 1) to n-1, where n is the number of elements in the array. A1[0 to n/2] and A2[n/2 + 1 to n-1], these two problems are further divided until the size of the sub-problem becomes equal to 1. After that, the Merge function merges the subproblems and places all the elements in the right order. The same is shown in the given figure. 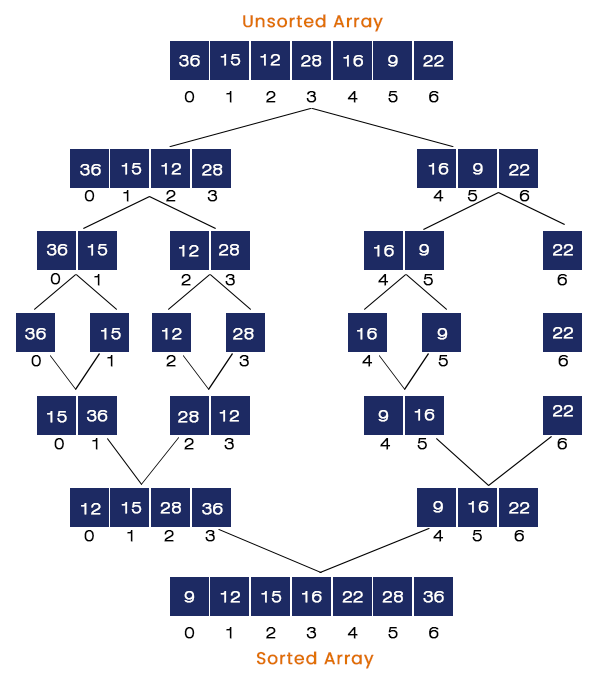 Let us take understand the above idea through an example:

Step 1– In the first step, the array of size = 7 is divided into two sub-problems of sizes 4 and 3. We have two Merge sort function calls Merge_sort(A, 0, 3) and Merge_sort(A, 4, 6)and one Merge function call Merge(A, 0, 3, 6). The first Merge_Sort function is solved in the next step, and the rest of the statements are stored in the stack.

Step 5 – Like above, other function calls are made and executed. Here, Merge_sort(A, 2, 3) is called. It is further divided and Merged by the program. For this function call, 12 and 28 are placed at the index = 2 and 3, respectively.

The main difference between Heap Sort and Merge Sort are listed below in the table: