A collection of legal characters that will recognize by a programming language known as a Character set.

Python is compatible with all ASCII and Unicode characters. Python character set includes the following:

Since Python supports the Unicode standard, and it also supports ASCII and Unicode.

What is a Token

The smallest distinct unit in a Python programming language is called a token. Tokens are used to create all statements and instructions in a program.

We have various tokens in Python that are:

These python tokens are built on top of a python character set.

Keywords: In a computer language, keywords have a particular significance or meaning. They are utilized for their unique qualities. They cannot be utilized for any arbitrary reason, including as names for functions or variables.

In Python, we have 33 keywords. That include:

Identifiers: The names assigned to any variable, function, class, list, method, etc. for their identification are known as identifiers. Python has certain guidelines for naming identifiers and is a case-sensitive language.

You have certain rules for naming an identifier in the python programming language.

Python Literals: Literals are the constant values that are fixed. The source code uses literal in Python.

In a python programming language, you have support for a different type of literal, which include:

Boolean literals: In Python, Boolean literals are True or False values. Where T and F are capital letters, you should not use small letters as Python is case sensitive language.

Special literals: None is said to be special literal in a python programming language. We use None when you have to denote nothing that is no value, or the absence of value.

Python uses lists to store the sequential order of different kinds of data. Although Python has six data types that may hold sequences, the list is the most popular and dependable form. Because Python lists are changeable types, we can change their elements after they've been generated.

A tuple is an assortment of immutable, ordered objects. Since both tuples and lists are sequences, they are similar. Tuples and lists, however, vary because we cannot alter tuples, although we can modify lists after creating them. Additionally, we build tuples using parentheses, whereas we make lists using square brackets.

The information is kept in key-value pair format using a Python dictionary. Python's dictionary data type can mimic real-world data arrangements where a given value exists for a particular key. The mutable data structure is what it is. The element's Keys and values are used to define the dictionary.

A Python set is a grouping of unsorted elements. The set's elements must all be distinct and unchangeable, and the sets must eliminate duplicates. Sets can be changed after they are created because they are changeable.

In the python character set, we have special characters used as operators.

In Python, we have different types of operators that are: 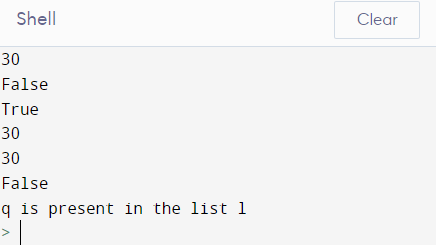 Punctuators: Punctuators are the symbols that are used in Python to form the structures, Organize statements and expressions.

Some of the punctuators in a python programming language are: