How to convert integer to float in Python

In this article, we are going to discuss how to convert an integer data type to a float data type. Datatypes are the categorization of the data items. Every value in Python has its datatype. The classification of data items to put in some category is called data types. As we know, Python is an object-oriented programming language, and everything in Python is an object. Data types represent classes, and the instance of these classes are called variables.

These are the built-in data types in Python:

There are three types of Numeric Datatype in Python. Both Integer and Float are categorized into Numeric Data Types. Numeric data types take the numeric value. These data types are created when a value is assigned to them. For example, var = 12.2 will assign a memory block to var with the value 12.2. In Python, we can also delete the variable using the del keyword, thus freeing up the memory.

Type conversion functions are defined in Python to convert data types. In Python, we can convert one data type to another. Conversing data types is very useful in day to day life or while solving coding questions.

Let us discuss these types of conversions in detail:

Implicit Type conversion which is also known as Coercion is when converting data type take place during compilation time and is done by compiler itself for us. To get the better understanding of the topic let us see an example below: 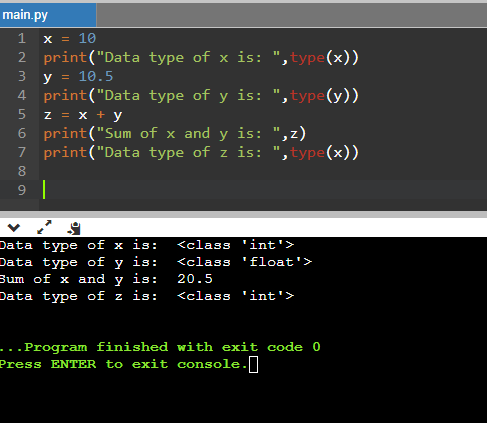 In Explicit Type Conversion, the user's data type conversion is done manually as per the requirements. Explicit Conversion is also referred to as Type Casting because the user casts the datatype to which he wants to convert to. To do the type conversion we use some pre-defined functions like float(), int(), str(), etc.

The general syntax of explicitly converting data type is:

With the explicit data type conversion, there is a risk of loss of information since we are forcing a data type to a variable.

The data types are classified into two data structures Primitive and Non-Primitive.

Some forms of explicit Conversion in the primitive data structure are described below:

Let us see some examples of type conversion.

Addition of String to Integer

Some forms of explicit Conversion in the non-primitive data structure are described below: