Reverse a Number in Python

In this question, we will be given a number in integer format and the task is to return the reversed number. We are going to solve these questions with three approaches:

1. Reverse a number by iteration:

We will take the input as an integer and store it in a variable. Then we run a while loop and store the last digit of the given number in a different variable and then remove that digit from the original number. At last, we will print the reversed number.

Before writing the actual code itself it is advised to write the pseudo code or algorithm for the problem. After writing and understanding the algorithm it becomes very easy to execute the code.

Let us try to write the pseudo code first:

Now, writing the code for this pseudocode in Python is quite easy for us: 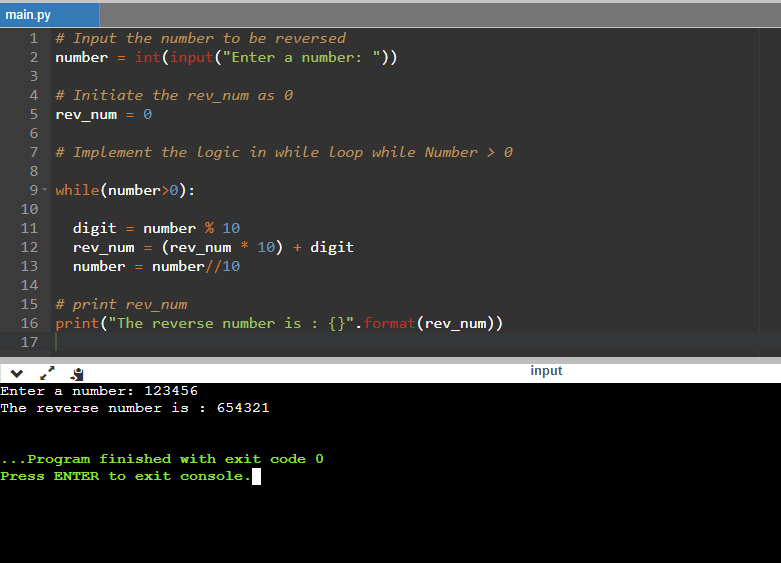 In the first line of the code, we have taken the input of the number. After that, we have initialized a variable rev_num as 0 in this variable we are going to store our answer.

Then we add the digit to the rev_num variable and also shift it to left in each iteration.

Then divide the number by 10 to get the second last digit in the next iteration.

This loop will run until the number is greater than 0. And finally, we print the rev_num.

We will better understand this program by taking an example and looking at each iteration step by step:

After the first iteration, we have number = 1234 and rev_num = 5, since the number is greater than 0, while the loop will run again:

After the second iteration, we have number = 123 and rev_num = 54, since the number is greater than 0, while the loop will run again:

After the second iteration, we have number = 12 and rev_num = 543, since the number is greater than 0, while the loop will run again:

After the second iteration, we have number = 1 and rev_num = 5432, since the number is greater than 0, while loop will run again:

After the second iteration, we have number = 0 and rev_num = 54321, since the number is 0, while the loop will not run and the code will just print the rev_num.

The next approach to print the reverse of a number is by using recursion. Recursion is a method of solving a problem when the problem is defined in terms of itself.

The logic will be the same, instead of in this approach we will define a function and then call the function with the number//10.

Let us look at the code:

The third approach is to use slice slicing, this method can only be used in Python. This is one of the advantages of Python, that it provides some efficient techniques. With the help of slicing, we can access a range of elements and can also choose where to start and where to end and in which order.

In this code, first, we have converted the integer number to a string. Then we have used slicing, the syntax for the slicing is start:stop:step . We have not passed anything to start and stop so it will take the whole string. The step is specified as -1, which means it will process the strip backward.

These are the methods to reverse a number in python. The most important task is to understand the logic behind the code, once you do that you can write code in every language.