Write a String in Python

Python is an object-oriented high-level programming language. Python has dynamic semantics and has high-level built-in data structures which support dynamic typing and dynamic binding. Python provides rapid development. It has an English-like syntax that is very easy to write and understand, which also reduces the maintenance cost. Python is an interpreted language which means that it uses an interpreter instead of the compiler to run the code.

The interpreted language is processed at the run time thus takes less time to run. Python also has third parties modules and libraries which encourage development and modifying the code.

While working in Python, we need to store data or export some and import some data to the files. The output of a program is not permanent, and it gets destroyed as soon as we close the program, so what if we want to store the output? So, in that case, file handling comes to help us.In this article, we will discusshow to write in text files in Python.

Python provides an in-built function to read and write files, so it is simple to handle files in Python. We can handle two types of files in Python, which are:

To write in a text, we use some steps. The steps to writing a string in a file using Python are:

Now, we will discuss these steps in detail

The syntax for opening the file using the open() function in Python is:

Like many functions, the open() function also accepts many arguments, but the mandatory ones are just two, which are:

In this case, we want to write a text file, so the mode we can use are:

Writing in a File

After opening a file with the open() function, we get a file object returned by the open function. To write the text on the file, we can use the two functions available in this file object which are written () and write lines().

We can also pass iterable objects like tuples or a set of strings and not just a list to the writelines() function.

After writing a line in a file, we will need to add a new line character manually.

To add the new line character in a text file we can use the code below:

Below is the example of how we can use the write() function to write a string in a file in Python.

After running the above code, a new file called Example1.txt will be created with the following content:

Note: If the Example1.txt already exists, then this code will overwrite the strings to the original file.

The output of the above code will be:

If we want to add every string in the list in a new line, we have to add the new line character in the code manually. 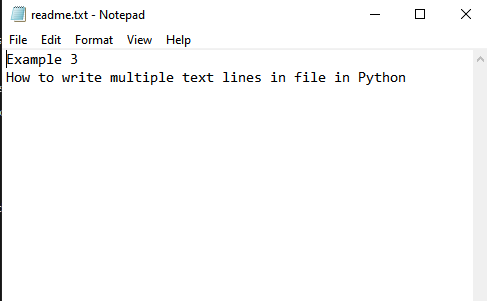 As you can see, the write mode has overwritten the previous text in the file.

Let us append some more lines to the file we created in Example 3. To append the strings in a file, we need to open the file with append permission. Let us see the code for appending strings:

After running the file, the list multiple_lines will get appended to the file readme.txt 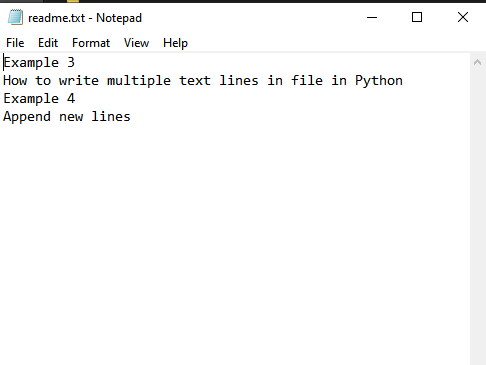