Definition of the Binomial Distribution

Python and the Binomial Distribution

Python's binomial distribution provides us with information on the likelihood that n separate trials will be successful. These tests ask yes-or-no questions. Tossing a coin is a possible illustration.

The binomial distribution in probability theory has two parameters, n and p.

n = The overall number of incidents.

p = Chance of success on a single attempt.

Let's look at a sample issue. The following is an illustration of the binomial distribution:

In a random experiment, a coin is taken for tossing and it was tossed exactly 10 times. what are the probabilities of obtaining exactly six heads out of total 10 tosses?

The binomial distribution table will provide the likelihood of x successes for each conceivable value of x if "getting a head" is regarded as a success.

Now we can find the answer for the above question by checking the p(x) values in the distribution table. According to the question, When a coin is tossed 10 times, there is a 0.20507 chance of receiving exactly 6 heads.

To get the illustration of the binomial distribution table for the above problem we can use python programming language. By writing code in python, we can easily analyze the distribution. And along with that we can plot graphs for easier interpretation.

To get this job done we need some predefined modules of python. They are Matplotlib and SciPy respectively. Where SciPy is used for determining the distribution table and matplotlib is for plotting graphs.

Python's Matplotlib is a fantastic visualizing package that is simple to use. A cross-platform library called t is used to create 2D plots from arrays of data. NumPy, Python's extension for numerical mathematics, is used by Matplotlib, which is built in Python. It offers an object-oriented API that facilitates the integration of charts into programs utilizing Python GUI toolkits.

SciPy is a scientific library for Python. The NumPy library, which offers simple and quick dimensional array manipulation, is a prerequisite for the SciPy library. The SciPy library was created primarily so that it would be compatible with NumPy arrays. It offers a variety of simple and effective numerical techniques, including methods for numerical integration and optimization. 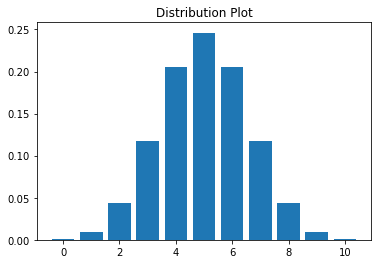 Distribution Table with the help of Seaborn Module

To generate these probability distribution graphs, we use the built-in methods of the Seaborn Python module. The scipy software also aids in the production of the binomial distribution. 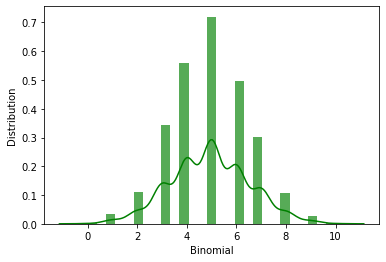