Many key factors for developing a great programming language include how it manages its memory space. This memory space largely depends on empty memory boxes called variables that one creates to store all sorts of data.
Early languages like C, C++, and Java are statically typed languages. By statically typed we mean, hard coding, stating the type of every element, variable during their declaration itself.
Though it always felt like a problem, it wasn’t dealt with until dynamic typing came into existence. In 1958, LISP was the first dynamically typed language. After nearly 40 years, in 1991, Python was released, became the most successful dynamically typed language.
Let’s understand how variables are stored? And importantly, how are their types labeled inside a memory space?
In languages like C, C++, and Java, we need to specify the data type of the variable at the time of declaration.

In Java, a string type object is created with the value “Hello”. Additionally, it creates a variable ‘message’ of string type. Then, it points/references to the object ‘Hello’ inside the memory space.
If we now decide to create another datatype, say integer, with identity ‘message’, it won’t work. It will raise an error stating “incorrect datatype”. C, C++, and Java are rigid in their manner of creating variables.

In Python, a string type object is created with the value “Hello”. Additionally, it creates a variable ‘message’ which points/references to the object ‘Hello’ inside the memory space. But, the data type of ‘message’ is not specified until runtime.

In the graphical representation above, the message had no specified type. It is pointing to a string type object. Now, if we decide to name another variable of the same name ‘message’ but of a different data type, we can. For example:

Since python is a dynamically typed language, the variable message will now refer/point to the last data type it is associated with. This final association will be done at run time. 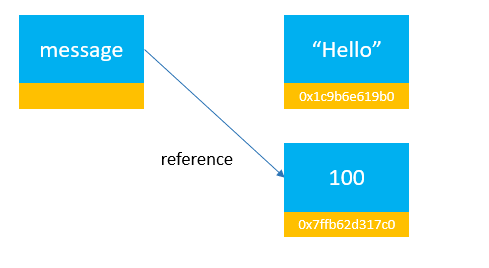 Let’s define what is dynamically typed language is with whatever we have learned so far?

A) No, dynamic typing does not imply weak typing. Dynamic/static typing is not related to weak/strong typing.

Dynamic typing: Declaring variable type is not necessary and it will be generated on the fly during run time.

Static typing: Declaring variable type is mandatory before usage, else it will result in a compile-time error.

Strong typing: Once a variable’s data type is declared it cannot be changed. You can explicitly cast the data type though.

A) Most higher-level languages, including dynamically typed languages, are type safe because any attempt to use a type incorrectly is guaranteed to cause an error (compile-time or run-time) in them.