Java inheritance is a mechanism in which a child object acquires all the properties and behaviors of a parent object. It helps in reusing the code and establishes a relationship between different classes.

It is an essential part of oops (object-oriented programming system).

As we know in real life, a son inherits the properties from his father just like that inheritance acts in Java. Java follows the similar concepts of son and father relationship.

Java inheritance represents a parent-child relationship which is also known as IS-A relationship.

A class whose properties are inherited is known as parent class whereas a class which inherits is known as Child class.

Java uses the ‘extends’ keyword to inherit the attributes and methods from a class.

Let’s have a look on the following example

In the above example, the Child class CSTeacher holds the attributes and methods of parent class Teacher like designation, collegeName and void does().

The extends keyword indicates that you are using properties in a new class that derives from an existing class.

The main disadvantage of inheritance is that two classes (base and derived) are tightly coupled that it cannot be used independently of each other.

Another disadvantage of the inheritance is that it increases time/ effort it takes the program through all levels of overloaded class.

Types of inheritance in Java

Different types of inheritance supported by Java are as follows.

In single inheritance, one class inherits only another class. 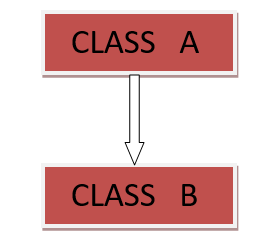 In the given figure, Class A is parent class, and Class B is Child Class, and class B is inheriting the properties and behavior. This process is known as single inheritance.

This process is known as multilevel inheritance. 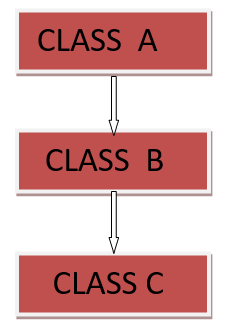 In hierarchical inheritance, a single base class serves many sub classes.

More than one child classes can inherit the properties of the parent class.

In the given figure, Class B, Class C, and class D are the subclasses of Class A.

In Java, the keyword ‘super’ and ‘this’ are very similar.

Super keyword refers to the object of the base (parent) class. It acts as a reference variable.

Super can be used in the following context.

Some scenarios with the super keyword

Let’s see an example to understand the super keyword.

In the given example, we have avoided the use of the super keyword.

In the given example, when we use the super keyword then it refers the parent class object.

Java doesn’t support multiple inheritance through classes, but It can be achieved through interfaces. It has some conflict like the diamond problem that is why java developers excluded this feature from java.

The following diagram and program will clear the image of the diamond problem.

As we can see in the above program on calling method m1() using D class object will cause complication. The program got confused whether it calls A’s method m1() or B’s method m1() because class D inheriting both class A and B. This complicated situation is called diamond problem.