Deadlock is when two or more processes wait for the state to do their tasks, but none of them can do so. It is a very common problem that one can see in multiprocessing systems and distributed systems.

For example, if a thread A has locked object A, all the other threads that want to acquire object A will get blocked.

Or, if thread A wants the lock of object B, acquired by thread B, there will be a clash between these two threads.

In both conditions, a deadlock will be created. 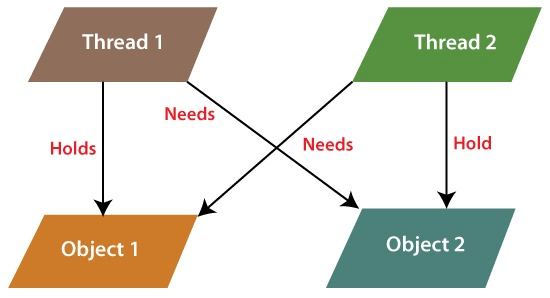 When a process demands-resources allocated to other processes, mutual exclusion arises, and deadlock occurs.

In Java, there is mutual exclusion between the threads. This means that in multithreading, only one thread will execute itself, and at that time, other threads will get stopped.

Preemption means switching or sharing resources between processes. No preemption means that if a process is holding one or more resources, then it will not release those resources in any case until and unless it completes its task.

It can be defined as a state of processes, circularly demanding each other resources.

Let's understand it with the help of a table.

So here, we can see a circular loop of resource requirements by three processes. This is called the circular wait.

Debugging a deadlock is not easy because of two reasons.

There are different ways to handle a deadlock. But, the common approach to handling any deadlock is to prevent the conditions from forming a deadlock.

In multiprocessing systems and distributed systems, deadlocks are inevitable. So deadlocks are detected and then resolved with the help of algorithms. The system's state is continuously monitored by an algorithm that takes care of deadlocks. When a deadlock occurs, it restarts some processes based on the system activity. It reallocates resources with the help of a resource scheduler to them to remove the detected deadlock.

Preventing a deadlock means preventing any of the four conditions required to form a deadlock.

If a process is holding a resource and performing some task with the help of that resource, and meanwhile, another process requests for the same resource. If the process releases the resource, its processing will get interrupted, and if it does not release its resource, the other process has to wait for its turn.

At first, avoiding a deadlock can sound like ignoring or preventing a deadlock. But it is much different than these two.

In avoiding a deadlock, we give the Operating system prior information about the resource requirements by the resources running in the system. Each request by the process is analyzed carefully before assigning a resource to the process so that it would not cause a deadlock in any situation.

Avoiding a deadlock uses a different algorithm that checks for the possibility of a deadlock occurring if a resource is allocated to a process.

If a deadlock is detected, it can be corrected using two methods.

Process termination has two ways to correct the deadlock when a deadlock is detected. Terminating a process means aborting a process. We can abort all the running processes in the system and then restart them, but the main problem is that the time and processed data by the process will be wasted.

Another way, rather than terminating all the resources, is by terminating the resources one by one until the deadlock is corrected. But the main problem with this way is that we have to check whether the system is still in deadlock or not every time a process is terminated, making it a complex time way.

As we know that preemption means not sharing the resources among the other processes. But while in deadlock, we take the resource from the processes and continuously allocate them to other resources until the deadlock is broken.