What is Jacquard Loom?

Jacquard attachment, Jacquard mechanism and Jacquard Loom are all the same. This Jacquard Loom machine completely changed, improved and made a lot of specific changes in the whole industrial department.

Jacquard Loom was previously called "Jacquard Machine". Also, it is a machine applied to a normal fabric. This machine made the composition of complex geometrical drawings easy and possible too. Another important thing about this Jacquard Loom is it has been the most important and useful invention for the textile industry. But today, the textile industry no longer uses punch cards. A Digital scanner is used by many people for creating a pixelated digital version of an image. 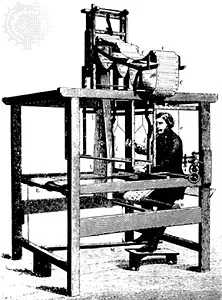 Multicolour drawings and complex geometrical are the important and main characteristics of this Jacquard loom machine. This machine lets a single weaver produce the complex fabric. We know that technology and tools are less efficient than when compared to today. The Jacquard Looms were simply activated or started by the hands of humans. The first machine to use punch cards is the Jacquard loom machine. This machine is important to computer history too.

At most, two people used to work with Jacquard Loom, the one who handles it, and another person is the helper who helps in moving certain knobs to raise up the healds to let the weft threads get through. And these looms were called heddle looms. This Jacquard loom allows the work to be done fast by its speed.

The "Jacquard" in Jacquard Loom is the name of the scientist Joseph Marie Jacquard as it was patented by him. Simply, we can say this machine took the name of its inventor. This Jacquard Loom was demonstrated in 1801, and it is an attachment for powered fabric looms.

History says that the jacquard loom was not the first Loom to use punch cards, but a loom invented by Basile Bouchon is the first Loom that used a perforated paper tape roll in 1725, which later upgraded by his assistant Jean-Baptiste Falcon in 1728 to use punched cards. The invention of this machine is still fundamental for the Textile world. The one who is working with textiles should be thankful for this invention. Giovanni the Calabrian invented the first Loom. But the invention of this Loom by scientist Giovanni is boycotted by some labourers in the textile industry.

The reason behind boycotting this Jacquard Loom by them is because they thought because of this invention, there would be an increase in unemployment as it reduces the work. Joseph Marie Jacquard improved what was made by Giovanni the Calabrian. Maybe the textile world would work differently if this Jacquard Loom is not invented. We can say the invention of this machine is revolutionary.

This Jacquard loom machine was an inspiration to Charles's planning to use perforated cards. Because of this French invention, the idea of storing the information to input the information into a computing device helped to create the company IBM.

Let us know more about the Jacquard loom and how its features.

The main characteristic of the jacquard loom is that it has larger designs that it is intricate, curving and also woven in. It is a loom created/invented to weave fabrics of the most beautiful and intricate design whose control mechanism use patch cards with holes punched in them. Using these punched cards, which are with holes in the jacquard head, enables the control of individual warp threads. Jacquard fabric is made Using Jacquard Loom. These modern Jacquard fabrics can be made from a variety of different fibres, silks, natural kinds of cotton, and man-made polyester. The jacquard ribbon is made by using Jacquard Loom.

Durable, good lustre, versatile, heavy fabric, long floats on the reverse of the fabric, expensive, colour woven, complex and beautiful designs are some of the important features of Jacquard fabrics which are made by using Jacquard Loom.

The beautiful dresses, linings, trimmings, decorative pieces, and draperies are end uses of Jacquard fabrics. The patterns which are used on these fabrics are usually floral, swirling and many other different colours. Damask, matelasse, and brocade are also other fabrics of jacquard looms. In these modern eras, these most popular Jacquard looms are getting controlled by computers. Before, these machines were controlled by punch cards. Punch cards are used to the main role in the working of Jacquard machines.